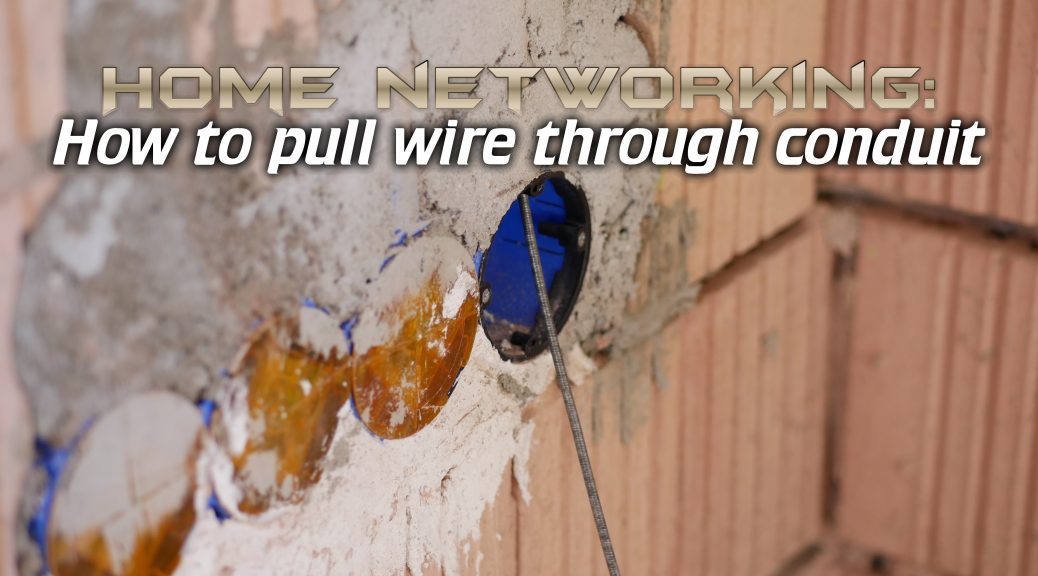 After the video which prepared you to run network cable in your home, this video shows you how it’s done!

As always, watch the video to get all the answers!

When you’ve pulled your cable, make sure you keep enough overlength on both sides. I mostly kept between 10cm to 20cm at the destination end (You want to snip off a bit because it might be damaged because of pulling it). At the central point I keep about 2.5 meters, that way I’ll always have enough, whatever way I end up mounting everything.

In dutch we call this a “kabeltrekkous” it’s a form of sock or stocking which slides over the cable and then holds the cable by the mantle. This is potentially less damaging for the cable because you aren’t pulling on one or two of the pairs. They work by gripping the cable mantle and the harder you pull the tighter it will grip the cable.

If you are pulling cable, maybe get one of these to pull them!

Now that we have all the tools needed to pull cables through your wall, let’s pull some cables! If you missed that video, take a look at the box on top here, best to watch it first.

Wait, you want to know what cable you need? I made a video about that too, click here, on the other side! *watch left and right for a bit* Ok, great!

At the end of this video, I’m going to share a secret tool which I didn’t talk about last time. It’s helped me run my cables through the longest lengths of 15 meters and more and without it, it was almost impossible, so be sure to watch the whole video!

To get started, first determine where you need the cable. Then, we need to to figure out through which conduit you need to pull your cable. Most often the conduits themselves aren’t labeled, on either side. Especially when they all come together, it’s impossible to tell which one goes where. To figure out through which conduit your wire needs to go, you first go to the destination end.

From there, you insert the pulling wire and thread it through untill you reach the central location. There you pull it through far enough so that you you can easily attach the cable or cables to pull through.
Once that is done, you attach the cable or cables to the end of the pulling wire. Take care doing this! You don’t want it to snap half way through and have to start all over again.

Attaching your cable to the pulling wire

In my case I’m using CAT7 cable which is quite thick and stiff. First, start with removing the plastic outer layer, then split the pairs and snip off 2 pairs and the ground wire. We want the connecting to the pulling wire to be as slim as possible, but 2 pairs are strong enough to tightly hold the cable.

Then, remove the foil from the 2 pairs and thread in through the pulling wire hole and twist them so that they don’t come loose. In our case, we want to pull two cables so we attach the second cable to the first cable. We use a piece of tape to connect them together. There are multiple ways of doing this, so try what works best for you.

Using tape is optional if you are only pulling one wire but you can’t get around it while pulling two. If you just want to be extra sure the connection will hold, using a bit of tape to strengthen your connection is always a good idea!

The last step is to lube up the cable. As shown in the previous video, we have a big bottle of 3M cable lubricant which has worked well for us. I don’t advise using dish washer soap or anything of the sort because of in time it will dry up and basically glue the cable in your conduit. If you ever need to replace it or run something else through, you (or the person who lives there after you) will have a big problem!

Start pulling the wire through

Once that is done, carefully start pulling the pulling wire through the conduit and thread the “buldge” of the connection point through the start of the conduit. Once it’s in, you can start moving it faster.

This also immediately brings me to an important point. Although it’s called pulling cables, most of the time you’ll be working harder on pushing the cable in then actually pulling it through. It varies a bit on the type of cable you are using but with CAT7 for instance, this is certainly the case!

Especially on longer lengths, after about 5 to 10 meters, either the connection you made just won’t be strong enough to also pull the weight of the weight of the cable that’s dragging behind it. So the method we used was to have the person on the pulling end apply a constant “pressure” and the one feeding the cable was the one who was determining how fast it actually went. We always let the person who was feeding the cable have the lead and determine the tempo.

Now CAT7 is a very though cable, if you have more flexible cable, pulling will probably work a bit better, but just remember it’s always two people working together, feeding and pulling the cable at the same time! That’s why, as I mentioned in the previous video, having a way to communicate with your partner is very important!
Once you have the cable through, leave about 30cm of spare cable at the destination end and leave a good oversized length at the central point. I chose for about 2 meters so that I’ll always have enough length. I also gives me a bit of over length if I screw up terminating the cable at either end to have a few go’s at it. 😉
And that’s it! You’ve run 1 or 2 cables through a conduit and those are ready for termination! Termination will be another separate video.

Oh, that secret tip? If you ever need to run cables through a conduit that’s either very long (more then 15 meter) or you encounter some nasty bends, you’ll not even be able to thread through your pulling wire. We faced this problem with the long runs in the garage. I managed one after trying to push it through for 45 minutes but this was quite tough work!

The trick? Get your vacuum cleaner out and a decent amount of light weight rope. I’m saying decent because you’ll need the length of your conduit with some extra length on both sides. Now take a piece of conduit that’s one size smaller or bigger then what you have in the walls. Take some tape and tape it to the end of your vacuum cleaner hose and check to see if it’s airtight.

Once that’s done, make a little ball of knots or attach a little piece of plastic bag to the rope end and have one person go to the central location where all the pipes come together. Slide the vacuum cleaner conduit suction device over or in the pipe at the destination end and turn the vacuum cleaner on. Use it’s lowest power setting!
The other guy should now hear the suction and try and find the pipe it’s coming from. Once he does he should let the rope be sucked in, but keep holding on to it so it doesn’t disappear into the pipe completely! Tying it down somewhere temporally is a good idea. 😉

The rope flies through very quickly so make sure to check regularly you aren’t just running it into the vacuum cleaner. Once it’s through, get the excess part out of the vacuum cleaner and attach the pulling wire to the rope. Make sure you attach the end you need in the central location! Once that’s done, starting pulling the wire and feeding in the pulling wire. Don’t pull too hard, because you need to use light rope it isn’t very strong and often not strong enough to pull the weight of the pulling wire the whole way.

The trick is to pull and push at the same time. When you get stuck, move forward and back a bit and you should be able to get the pulling wire through where you couldn’t before. Now just follow the normal procedure and you should get the wire to where it needs to go!

And well, that’s it. If everything went correctly, you should now have wires in your walls like in these pictures. In the future I’ll make a video about terminating all the connections! Hopefully this was helpful to you, if it was, give the video a like and subscribe to see my next videos! 🙂

Hopefully everyone enjoyed the video and thought it was educational. Any questions or comments are always welcome, here, or on YouTube!