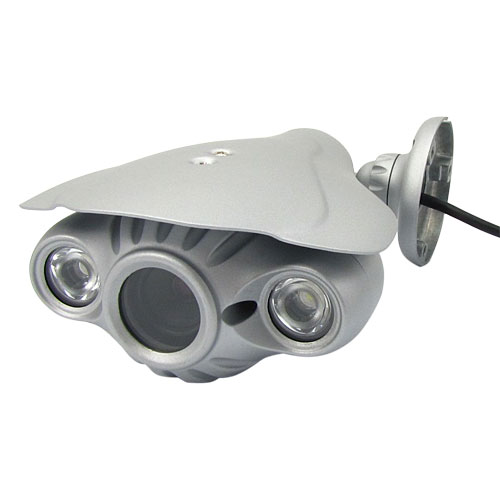 I bought this camera about a year ago as can be read in my previous blog entry. I was on a quest for a good but cheap Megapixel IP camera and this camera would have been the ‘holy grail’ if it had worked correctly. A lot has happened since then!

More about that later, first some specifications:

Quality/Performance:
The camera provides outstanding picture qualities. Both picture quality during the day and night time is very very good! Among the best I have ever seen from an IP camera, only companies such as mobotix provide better picture quality, but those are in a 10x price class, so not really comparable.

I use it exclusively in 5MP mode. The lower modes do not scale the image but basically crop the pixels that are read from the sensor. So 1080p seems more ‘zoomed’ in then 5MP. This is an illusion, it’s just that the 5MP has more pixels, not that less pixels are zoomed in, the picture just seems bigger on your monitor.

Sadly, not all was perfect with the camera. Although the camera displayed great image quality and sharpness during day and night it had one fatal flaw. It’s RTSP streaming was flawed and would either stop of become corrupt making it unusable.

Since then I’ve done some extensive research into this camera and the components used. It turns out that there are a lot of models using the same TI Da Vinci DM368 DSP’s. The securitycamera2000 website seems to be using this DSP regulaly combined with either a 3 Megapixel or 5 Megapixel CMOS sensor, but also other vendors have models that use this chip so basically based on the same design and firmware (From what I have been able to tell). The Texas Instruments DSP comes in 2 variations the DM368 (Dual-Core) and the DM365 (Single-Core).


Early beginning of the evening during late sun. Excellent sharpness and picture quality

While it was snowing. With the new firmware you see that it now displays the correct day of the week and current bitrate

In pitch black darkness, only lit by the IR of the camera. Excellent quality!

During the day, still bad weather, filmed at 5FPS

Comparable hardware:
This camera DSP system is used in many cameras:

If you search a bit you can find many different models with similar specifications.


The Initial Problem:
As I said, I have had this camera for almost a year now and although it works, it did not work for all the intended uses I wanted to use it for and even for the purpose I did use it for it was flawed with corrupt images, etc.

I have always believed that the hardware itself was good, but that the problem was firmware. I have bugged securitycamera2000 now and then and they have provided me with several new version over this timespan. But a few days ago I started googling around a bit, also inspired by the following excellent blog post (If you are interested in this type of camera, be sure to also read is blog post. He also has some excellent sample videos!). If there are so many models of this hardware out there, how can anybody seriously use it? The comments in the blog post confirmed I was not the only one having problems.


Newer Firmware:
So, let me walk you through the firmware versions that exist (I will offer all for download), what upgrade path to follow and the firmware and settings I am using currently that have been performing perfectly for the past 2 days.

Since that build, multiple versions seem to exist which offer different functionality. I will list the firmwares:

As you can see these firmware seem to offer a different feature set. The first is tailored to ONVIF (Tested and working) and the second is called VNF0 and is actually compiled in 2013! Good to see work on the firmware is still being done!

–update– 2013-04-08
A comment mentioned a newer firmware version available. After a bit of searching I was able to find it. You can download it here: firmware_TS38ABFG-N-CITY-ONVIF-V2.4.4_20130226213309.bin. Upgrading didn’t go very smooth, I tried 10 times and while the message said “succesfull” in reality it booted up with the old firmware. Only when I reset the camera to default values did the firmware apply correctly. I have tested it and it seems to work fine for now.

–update– 2013-05-25
After a few searches on the internet I have been able to find a newer version of the firmware for our camera’s. It’s: firmware_TS38ABFG006-ONVIF-V2.4.6_20130418204812.bin. So it seems to be a bit newer again. As always you can download it from my server by clicking the name.
I have also updated the TSConfigIPC to version 1.0.2.9 which ships with this firmware. It seems to bring some interesting changes! Now, when changing tabs it will display a loading timer for instance.
Another tip, when upgrading the firmware, temporarily decrease the resolution from 5Mpix to 1080p for instance. This way I was able to upgrade with only one try!

–update– 2013-06-24
New firmware has surfaced! This time it’s firmware_TS38ABFG006-ONVIF-V2.4.6.2_20130609085722.bin. Seems from June, so quite new. No changelog, but I did notice it forced me to install a new version of the ‘tsconfigipc.exe‘ plugin. This plugin now has version 1.0.3.2. As always the downloads are available from my own FTP server. I uploaded the firmware and everything is behaving fine. If anyone notices significant changes, let me know through a comment!
(It seems in VBR I’m seeing better use of bitrate (more dropping and raising) then before, can someone confirm that?)

–update– 2013-10-31
And again new firmware has surfaced. Thank you commenter which made me aware of this. This time it’s version 2.5.0.0 so I thought it would be nice to make a new post about it. You can find it here: https://blog.quindorian.org/2013/10/new-firmware-version-2500-for.html. Further updates will continue in this post.

–update– 2014-09-16
TPsee is still working on the firmware for our camera’s and still brings out new firmware now and then. Since a little while datacompboy is also making custom firmware for our devices which include the newest version and some TCPfixes he puts into it. You download the firmware from my FTP here. And remember, if you are unable to upgrade, first revert back to 720p mode and try the upgrade again. The 5Mpix mode probably uses too much money.

When trying to connect to the camera for the first time try putting IE into compatibility mode if the page doesn’t show up correctly. Also the page tries to install a program called TSConfigIP.7z but fails because of default protective settings in Windows. To make things a bit easier I have uploaded that file so you can install it manually: TSConfigIPC.7z . This is version 1.0.18 of the TSConfig program, most camera firmware offers you an older version.


Best Firmware: (at the time of writing)
This firmware looks a lot different then it did before. First of all it adds ONVIF support which means you can use the ONVIF Device Manager. In testing this worked fine, found the camera automatically and showed the video. Not all the settings work, but you can use the web interface for that. My other cameras are not any different.

Before the firmware would be a webpage on which the settings could be entered. This never really worked reliably. First it starts that it only works in IE, this is something many camera vendors share, but with this camera, it won’t even allow you to login without it! That hasn’t changed with this new firmware.

Second is that the settings menu was on the webpage itself while now it’s in a separate window that popsup. The biggest improvement with this is that the settings now ‘stick’. Before if you would change you ‘video properties’ all settings would be reset to 0 everytime you refresh the page.This was quite an annoying ‘feature’. I’m glad to report that in this new version your previous settings appear and you can adjust what you need and save without problems.

But from what I remember of the old firmware, a lot more settings have been added. One of those is to set the camera into English mode permanently and also display the correct day of the week or current bitrate in the overlay. And this is also where the fix comes in.

I believe that in previous firmware I was not able to select if the RTSP stream should be either UDP or TCP. In this firmware I can!

All in All, this firmware makes a much better impression and it seems stable and usable now. This is the first firmware which allows me to use xpslit to stream for more then 10 to 15 minutes. Test of 24Hr+ have worked without a hitch.

Also, using VLC or the newest builds of FFMPEG there is no corruption whatsoever. But more on this later in a new blog post.

I have not tested all internal features such as motion detection or FTP upload since I use Genius Vision to do those things for me. 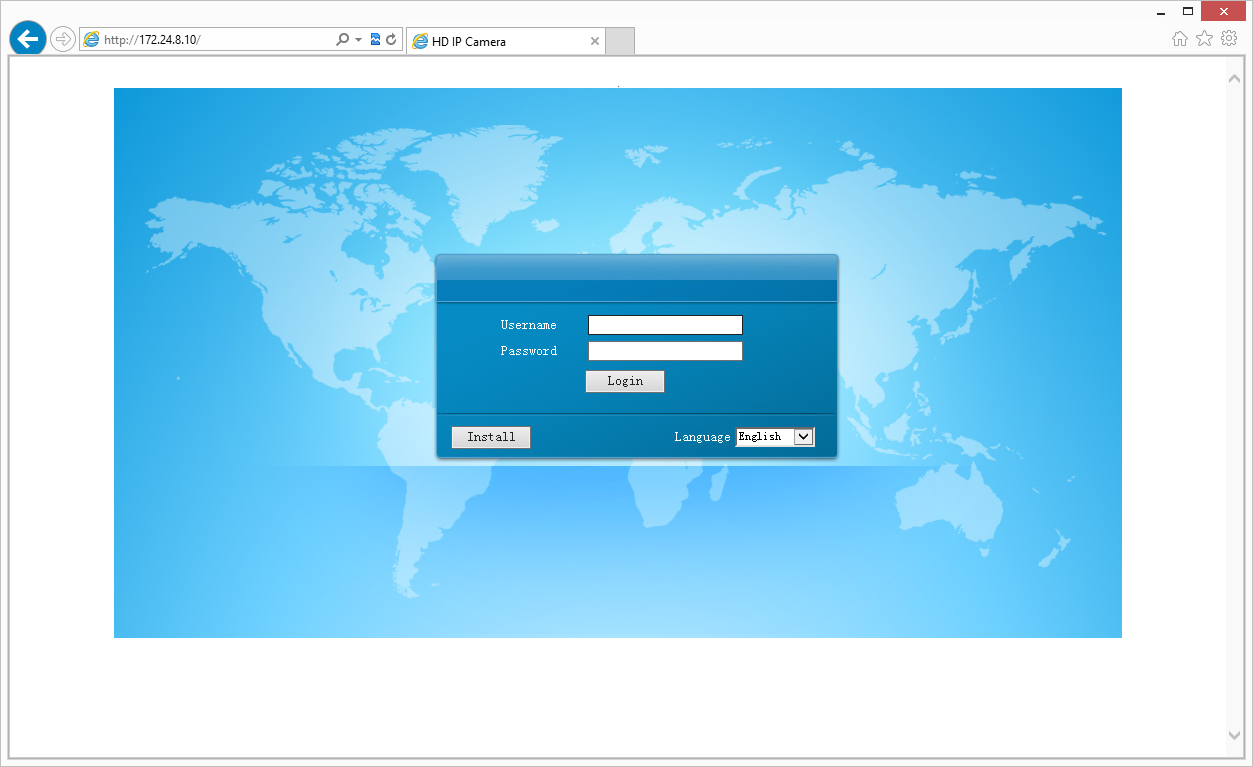 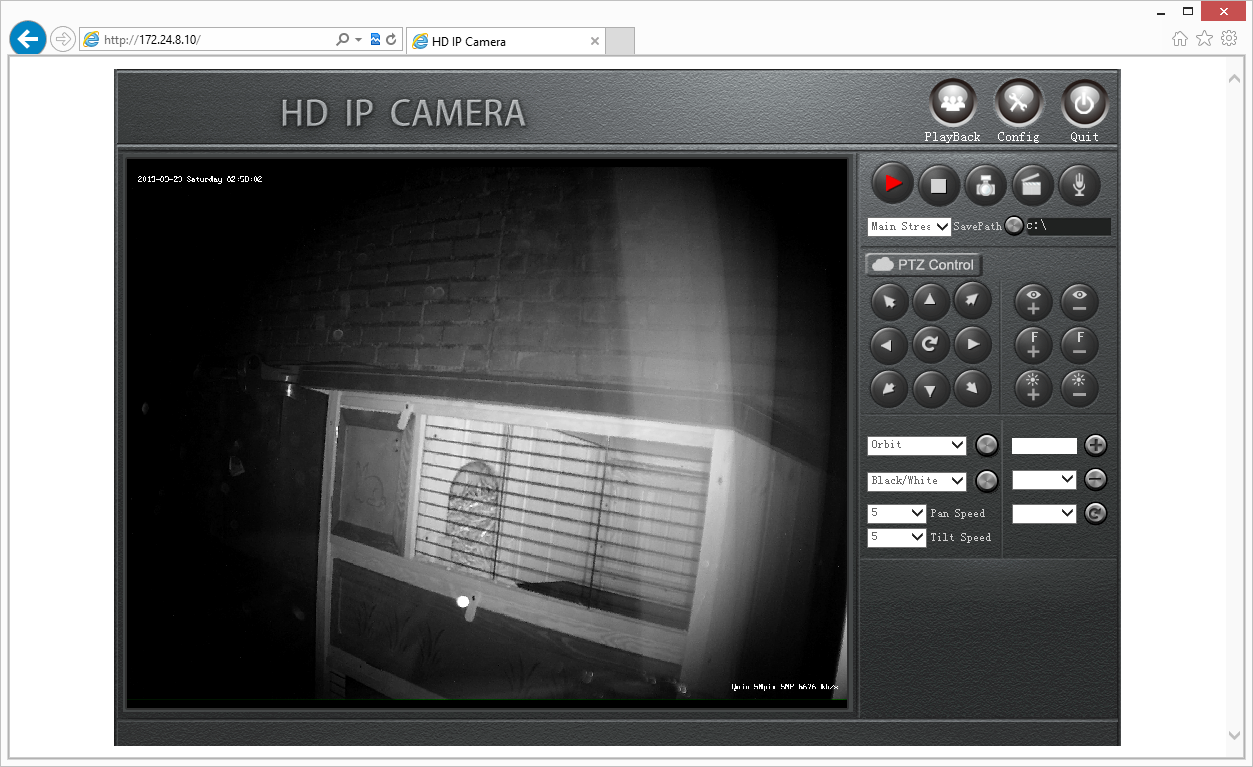 New in camera screen. All the PTZ stuff doesn’t work of course, but taking a picture and such does! Also the video preview isn’t screwed up anymore like it was before 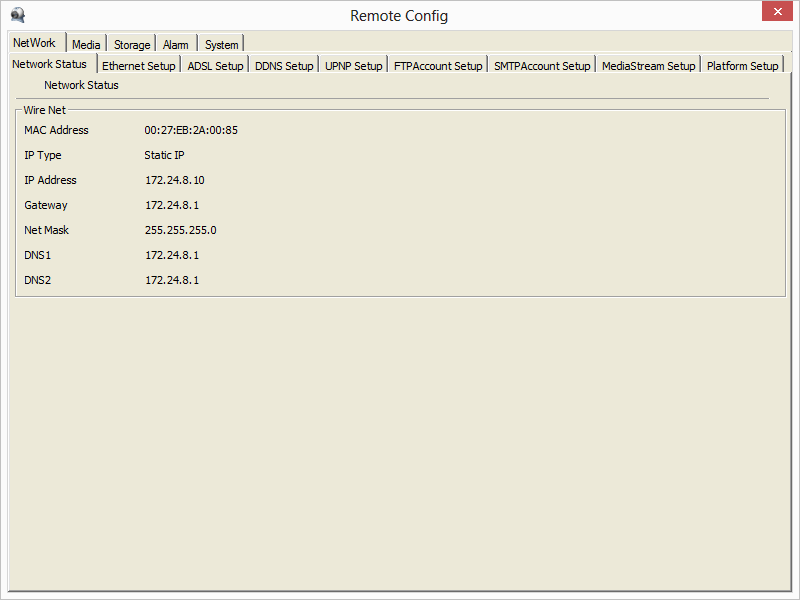 First of the new settings screen. This is now a ‘windows’ pop-up 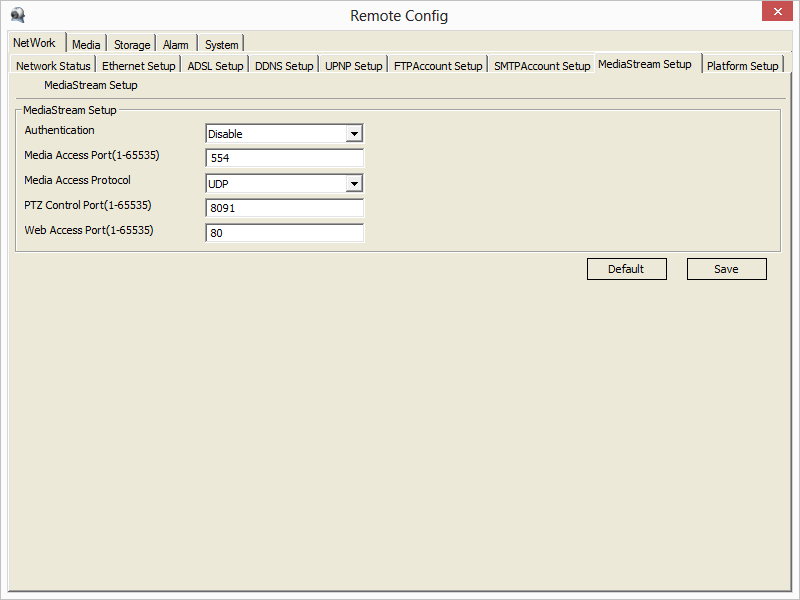 The new mediastream tab. Allows you to select UDP instead of TCP 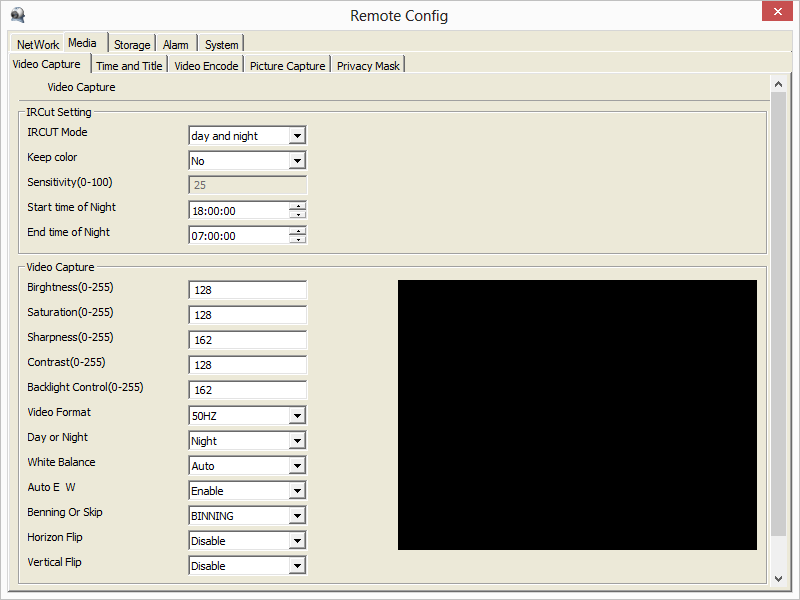 The same settings as in the previous web version, but now your settings stick after reloading! 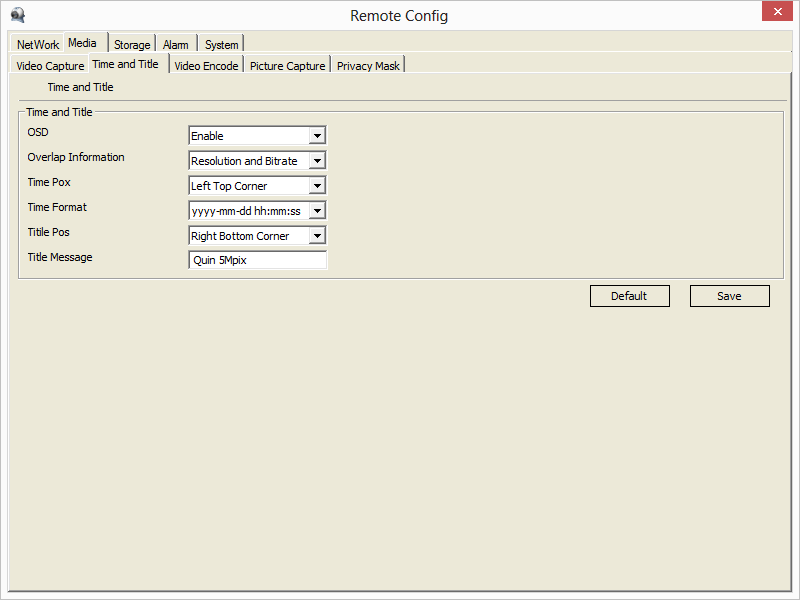 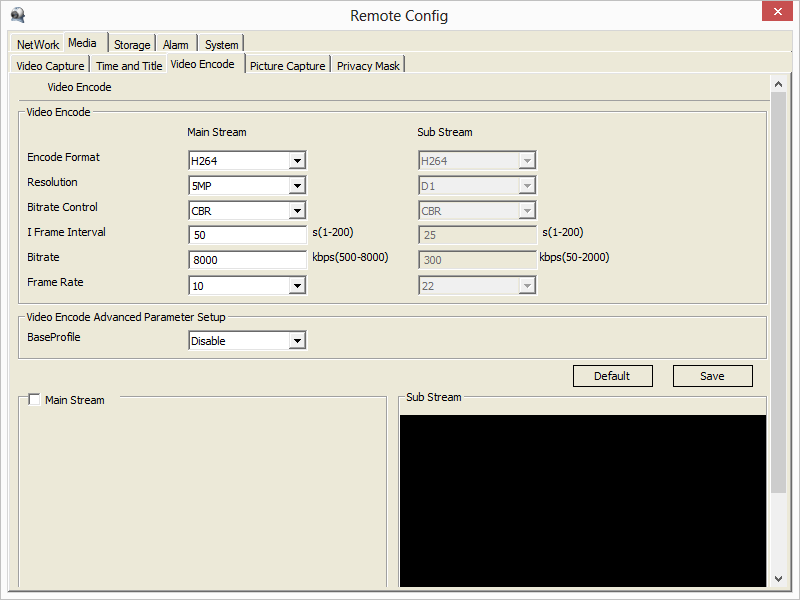 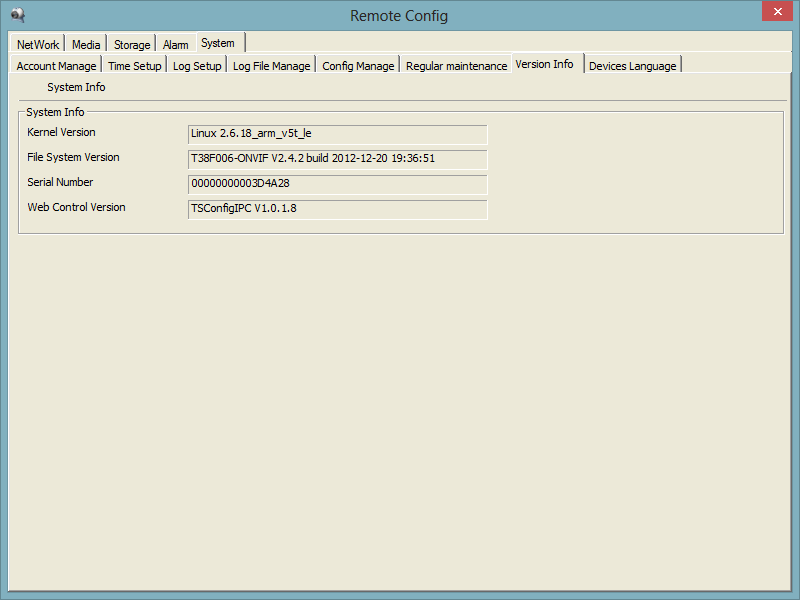 Current firmware version I am using. To download, check above
So, it’s reliable now and the image quality is great! That means I can now wholeheartedly recommend this camera for anyone looking for a great security camera for a low price.
If you wish to use the camera with direct RTSP instead of ONVIF you can use the following RTSP line:
rtsp://username:password@xxx.xxx.xxx.xxx:554/mpeg4
You can turn RTSP username and password on or off in the settings.
There are still some minor issues with the camera, they don’t really bother me, but might bother you.
As I have mentioned before. I seem to be getting stream corruption using Genius Vision, but I believe I have found the root cause of this. I will make a new blog post about that.

Grade: 9/10
Conclusion: A great camera for a very good price. I can recommend it without reservation. Also www.securitycamera2000.com has been responsive in support and communication towards me, I would definitely buy there again.

Any comments, questions, or else is very welcome in the comments!