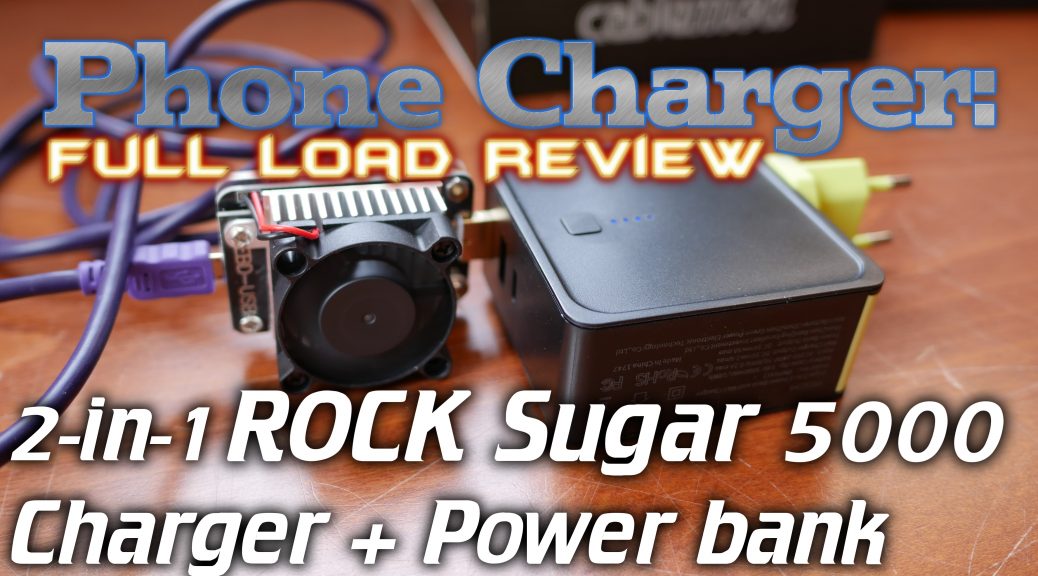 In looking for items to review I found this power bank + charger combination on Aliexpress and it looked quite interesting. I decided to buy it and subject it to my full load review test!

If you are just interested in the testing results, read on! Since this unit has a dual function design, I’ve split the review portion into three sections:

Charger function while plugged in

While plugged in the charger has a bit low maximum current it can deliver. As visible in the video I was able to pull a maximum of about 2.3A from the USB ports (any combination) before the charger would shutdown.

Although this functions ok, I like a hiccup function more, still it works well and if you overdraw it, it just shuts down which is safe.

During the video we determined that using multiple ports or one port made no difference in the maximum total power draw, I’ve only done single port tests My EBD-USB tester confirms what we saw in the video, around 2.3A is the max you can draw from the charger (any combination of ports) before it shuts down. This is fine for one device, charging 2 will probably also still work but more then that isn’t suited for this charger.

The charger having 3 ports with this amount of output Amperage is a bit much, one or maybe two ports would have been better. I guess I can understand having a dedicated USB-C port looks nice, but still, you can’t really use the 3 ports the device has.

(A multi-port test did not yield a different result.)

This charger displays the same efficiency as we’ve seen from most chargers of the last few years. Depending on load if varies between 80% to 85% efficient which is average/good.

While charging the power bank at the same time as trying to charge your phone the internals of the charger auto regulate and prioritize charging your phone. Once the phone becomes full it will automatically divert power to the power bank part and charge that.

This behavior is fine. I had the hope charging the power bank would be separate from charging the device but they share the same power supply. Still, in most situations this is fine.

Pulling the 2-in-1 from it’s socket automatically enables the power bank function. It does not do this continuously so there is a little hiccup of a few seconds. Still, that means you can (in most cases) comfortably charge 2 devices at the same time.

Since this is also a power bank, we need to measure the amount of power we can draw out of it. Using my tester set to a continuous load of 1A I reached a maximum of 3269 mAh drawn from the battery. Voltage was kept nicely in control until the power bank was empty.

Recharging the powerbank we see a total power draw of 0,02597kWh. Translating this to mAh this comes down to just around 5.6456mAh @5v. Meaning about 12% was lost during conversion from AC to DC to go into the battery, that is pretty much average/good, the same as most other chargers do.

The charger is available on Aliexpress (and uses quality battery cells so will get through customs without a problem), check it out here: http://geni.us/HFL3AHE

All in all, this is a very decent 2-in-1. It isn’t the summum of technical prowess but it does use good components and works well for it’s purpose. I really like the design and out shell, it isn’t that much larger then some other chargers and while it won’t provide more then enough power to use all ports at the same time, as a normal charger and a power bank which is automatically available when the power is out, it’s a very nice product!