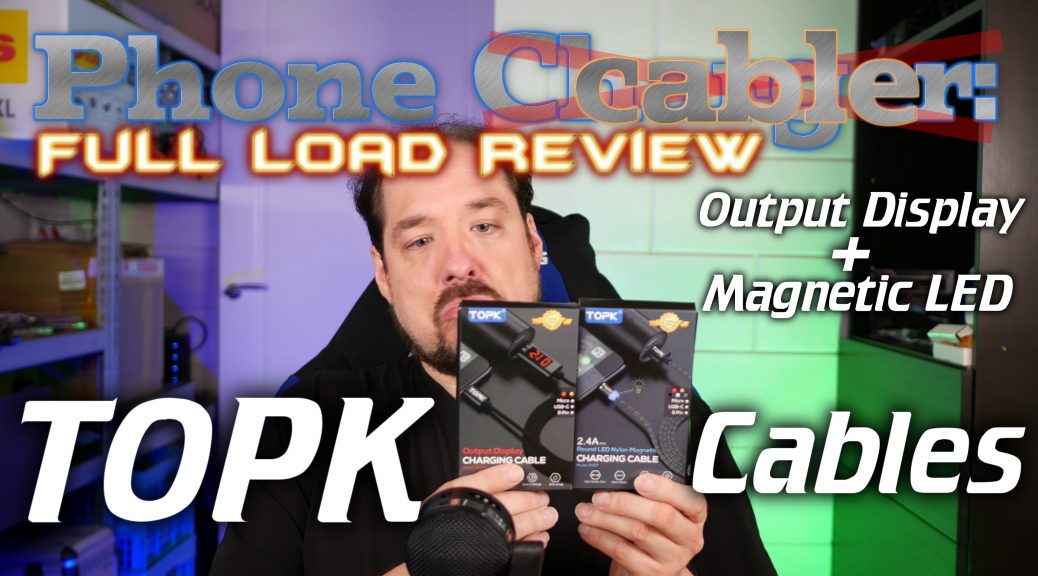 Today I’m taking a look at two cables made by TOPK. I picked these up myself from Aliexpress because they looked interesting! One has a magnetic quick disconnect with a LED and the other has a built-in Amp/Voltage meter, let’s see how they did when we stress test them a bit!

I’ve made a video review about the cables! But I do have to note that I wasn’t really able to get a good flow in the video. It would either end up too short and not give you the important information or too long but become a bit boring.  I’ve opted for the latter, so this is quite a long video “live testing” these cables. I have added a note with a skip point though so you can skip to kind of boring testing parts!

Cable tests I run at 5v 2A as shown in the video and also test with my EBD-USB. The results of the EBD-USB tests can be found here.

The LED Magnetic cable worked better then expected. In an old video I tested several different variants and found that only one or two solutions worked well. This cable takes a different approach and uses a round connector without data lines. Combined with strong magnets this results in a connection that finds it’s mark every time and to which orientation doesn’t matter.

So construction and mechanism wise, I’m a fan, let’s see how it performs. As you can see it doesn’t perform too bad at all. The voltage drops a bit lower to below 4.5v in comparison to our reference cable (4.5v at 2.6A)) but it’s still in a range I would find acceptable, especially around 2A it stays around 4.4v which is ok enough. Especially considering the LED and Magnetic connection that’s this cable has.

This cable integrates a built-in  Amp/Voltage meter!  With this, external measurement should not be necessary anymore and I also think it’s a better approach then integrating the same functionality on a charger.

Still, this doesn’t make the cable unusable though, it will still give you a pretty good indication to how fast your device is charging and what your charger is delivering!

Let’s see how the cable performed, keep in mind that the meter will also siphon off a little bit of power to power itself.

All in all the cable did ok, not great, but ok. The voltage drop is a bit high (even more then with the LED Magnetic cable) for this length. Most likely the display is the cause of that because it’s going to draw some power to itself instead of passing it through the cable.

Taking the meter display into account I think this cable does ok and is perfectly useable. It’s not to an amount that you would notice while charging your device.

5v 4A test on Meter cable

I decided to give the Amp/Voltage meter cable an extra test and that is 5v up to 4A. The Aukey PA-T1 is capable of this so let’s see how that performed. Some methods such as DASH charge from OnePlus use this method instead of sending a higher voltage through the cable.

I was curious how the integrated voltage meter would handle this. Ouch, voltage dropped WAY down, much more then is acceptable. This cable should probably not be used with devices that use more then 2A at 5v.

As always, here are links to the cables featured in this video and some of the other tools I used.

All in all these cables did ok. As pure charging cables their voltage drop is a bit more then the reference cable. But, they both have certain features embedded into the cable which can explain this and offers additional functionality.

And even with those features, voltage loss stays ok. The Magnetic LED cable actually does good/well but the cable with the Meter in it only scores an okay. Especially because when drawing more then 2Amps from that cable the voltage drops to unacceptable levels.

Would I recommend buying? Sure, both are well designed and function adequately. They aren’t the ultimate charging cables but both the Magnetic disconnect and the built-in meter offer features you might be looking for. If that’s the case, yes, they do well and I would recommend them!