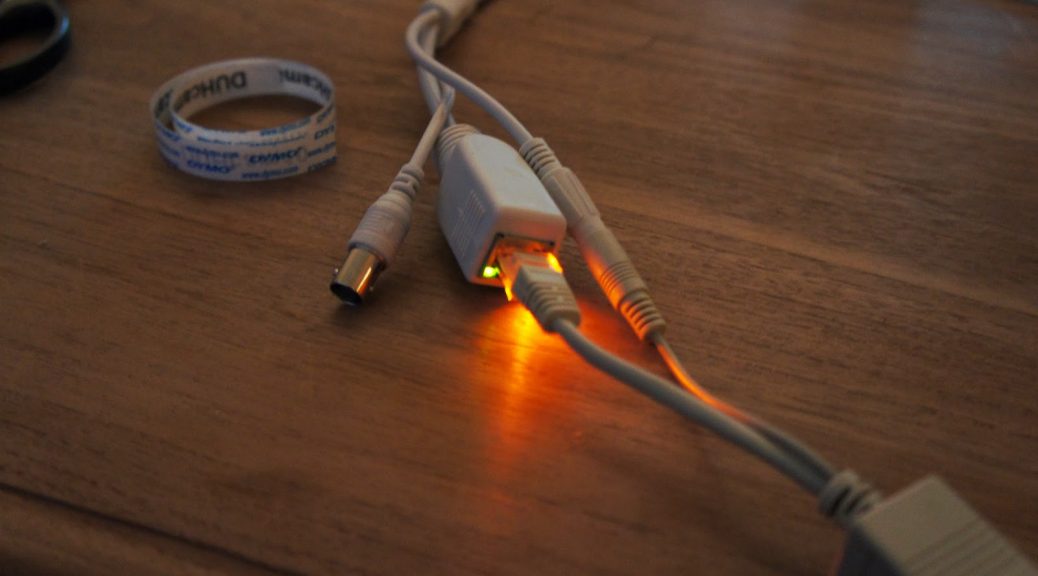 For a while now I have been writing about the TI DaVinci DM368 DSP based cameras. And while these chinese cameras work very well in most situations, they always come with only a small amount of cable in which you need to plug your UTP and power cable. And while the camera might be weatherproof, this connection certainly isn’t. I have a cheap solution which I use for this, read on inside! 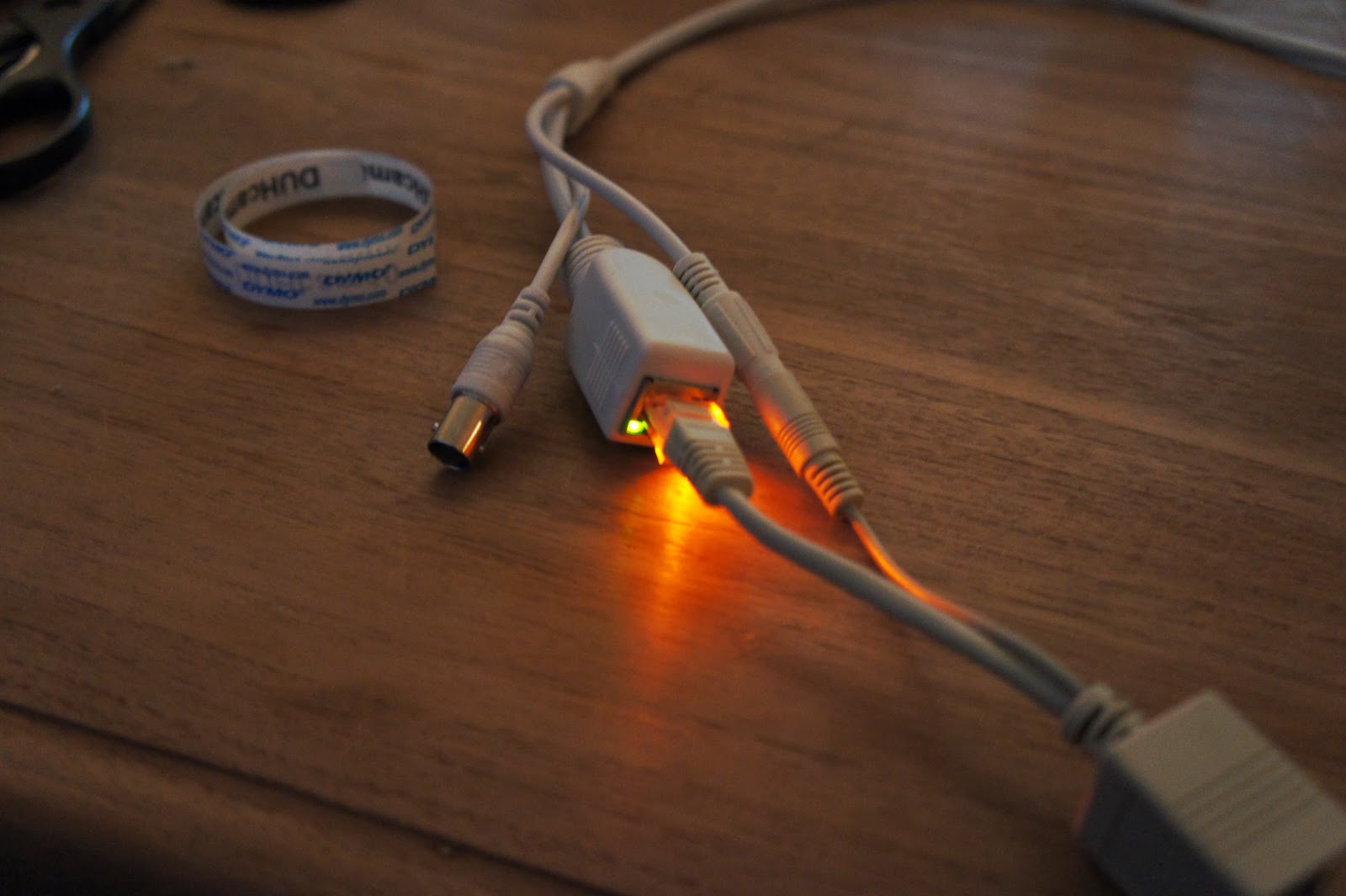 As you can see with the picture, letting those connections sit outside will never work. But first things first.

The cable that is connected to the camera is often only about 70cm long as shown in the following picture: 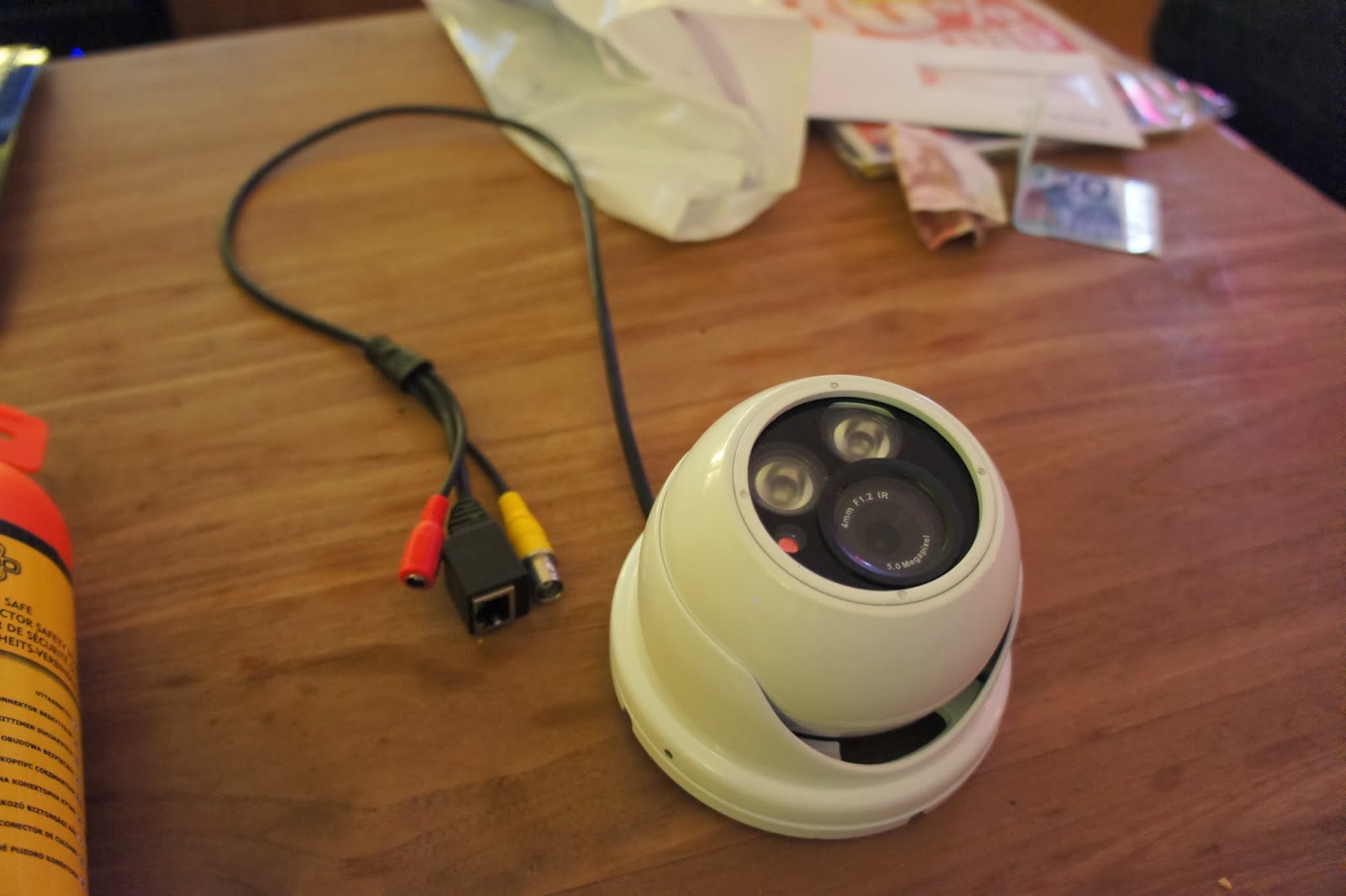 If you are deploying this camera in various spots outdoor that definitely isn’t enough. Actually, only when mounting the camera directly to a house where you can also access the backside of that wall is the only spot that would ever work, but would still require a bigger hole then I would feel comfortable of making.

The way I have solved this is using something called a “Passive POE” adapters. They work quite easily. Since your IP camera only uses 100Mbit, it is only using 4 of the 8 cables that are present in an RJ45 UTP cable. Since 4 of those cables are un-used, why not transport the power over them? Well, that is exactly what a passive POE adapter does, it runs the correct over pins 4,5 for + and 7,8 for -.

It consists of a pair of adapters. A ‘injector’ version and an ‘end-point’ version: 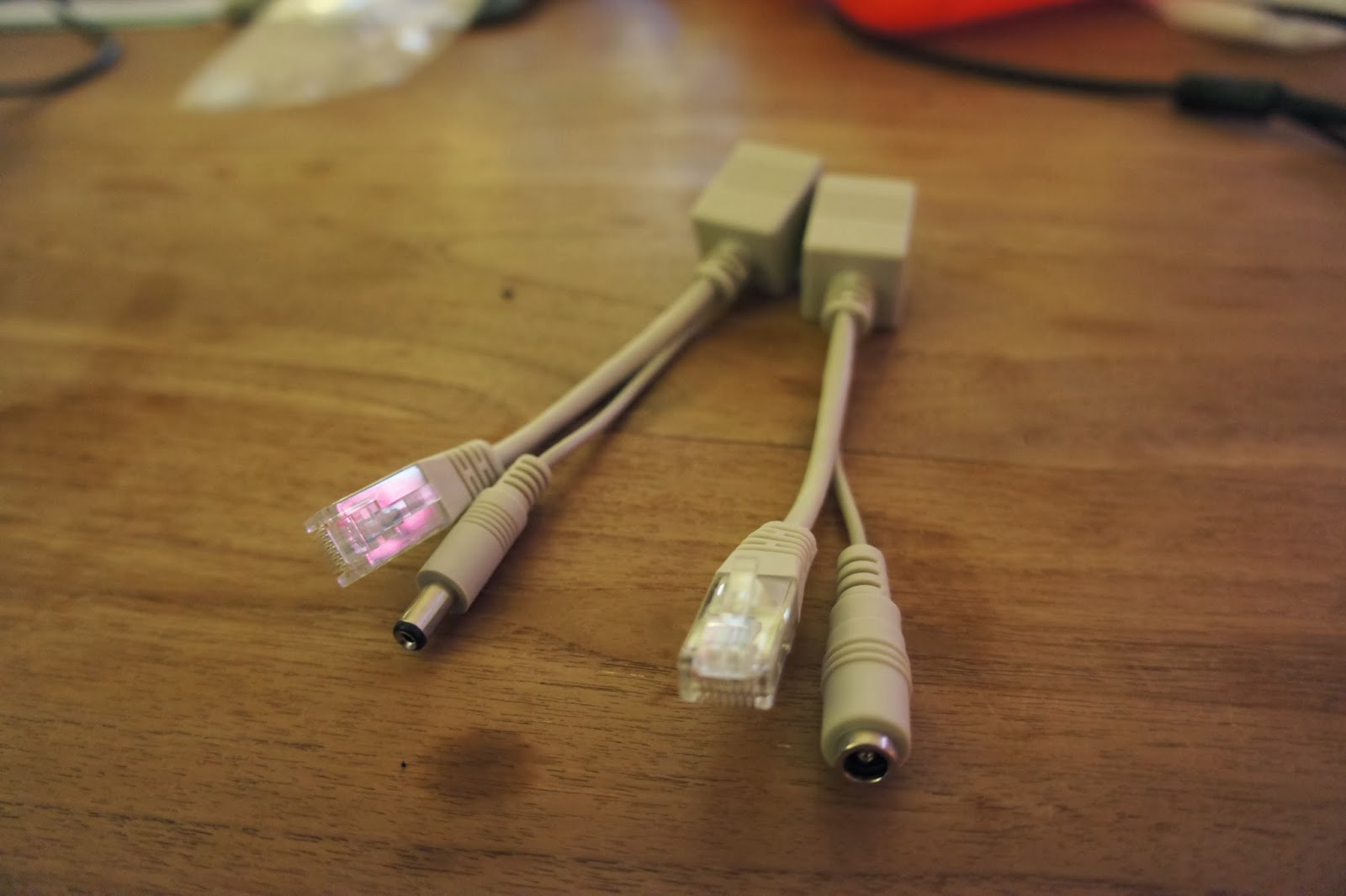 Here you can clearly see that one end has a plug in which you can plug your power adapter and the other side which you can connect to your camera
A word of warning: Never plug-in your UTP cable directly into a device or switch if using these adapters. Always use the adapter on the other side to plug it in! A little bit of smoke and a bad stench will otherwise be the result. As said, these adapters put current directly on the UTP cable so any device not prepared for that will very quickly die.
Below are some more pictures of the whole process: 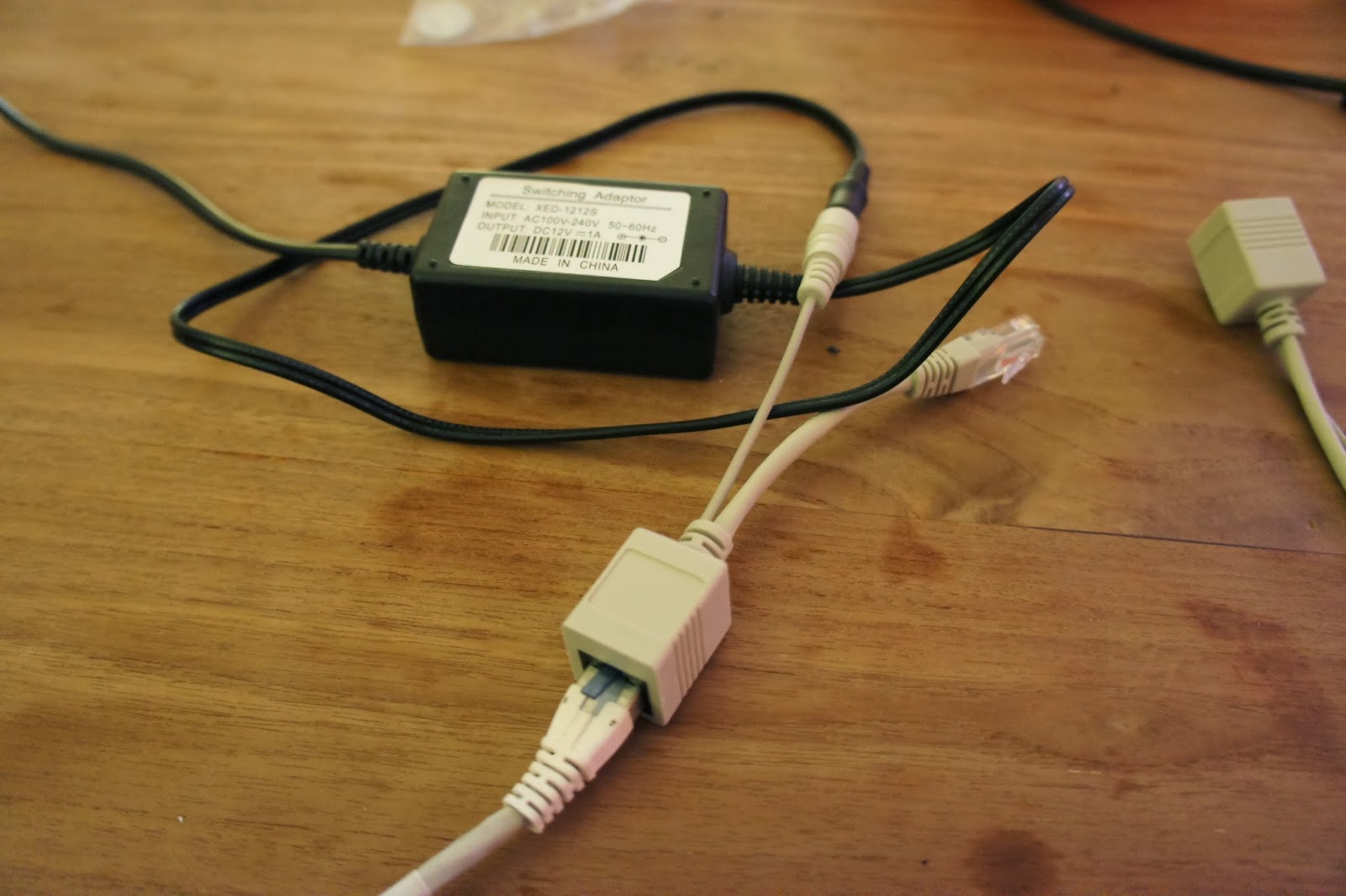 Here you can see the ‘Injector’ side having it’s power inserted and also the UTP cable connected to transport the data and power to your IP Camera. The UTP connector of the adapter will go into your switch 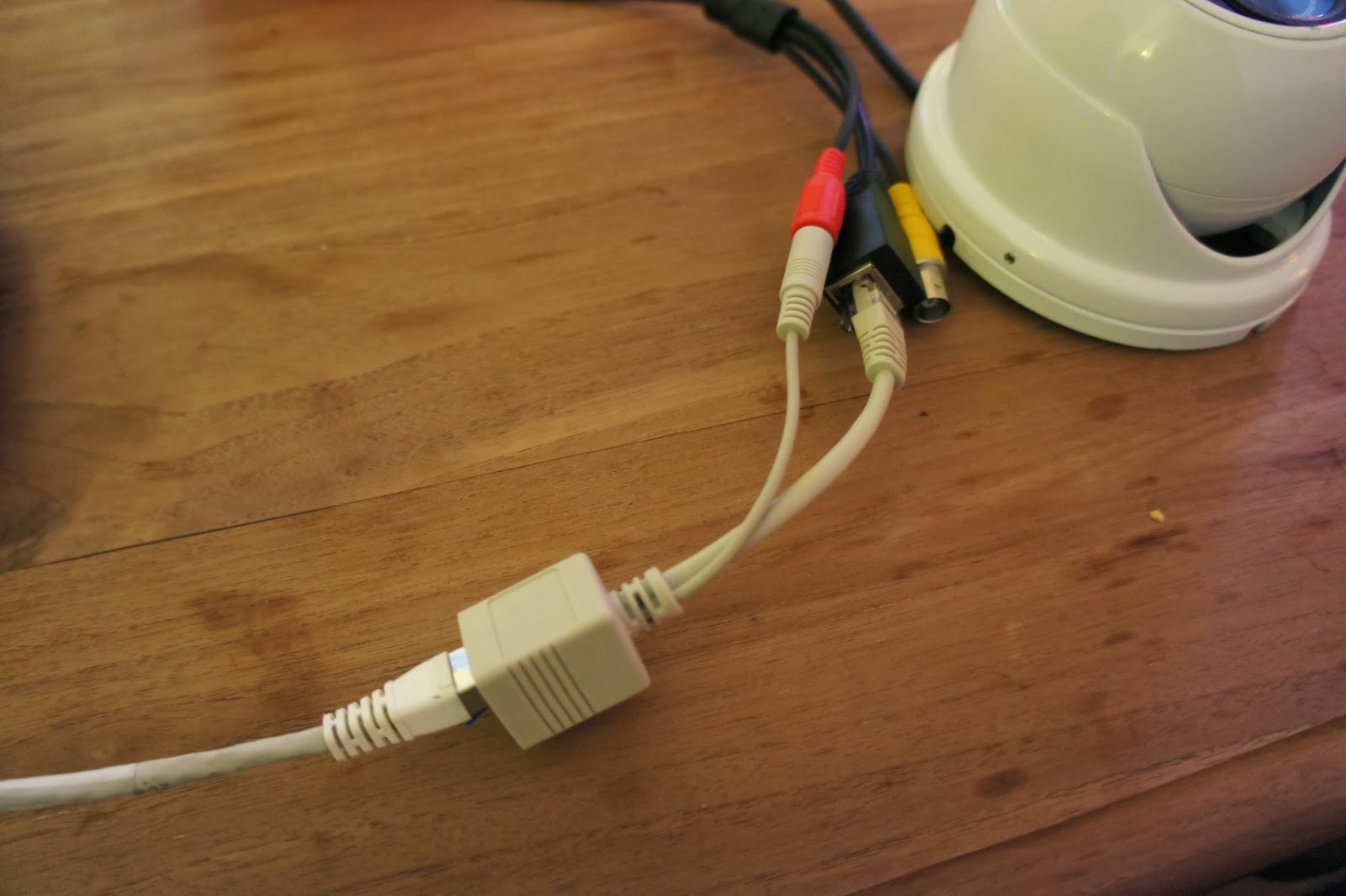 And this is the IP Camera side. Here you see the UTP cable going into the ‘Extractor’ block and deviding it back into a UTP cable and Power cable which you connect to cables of your camera 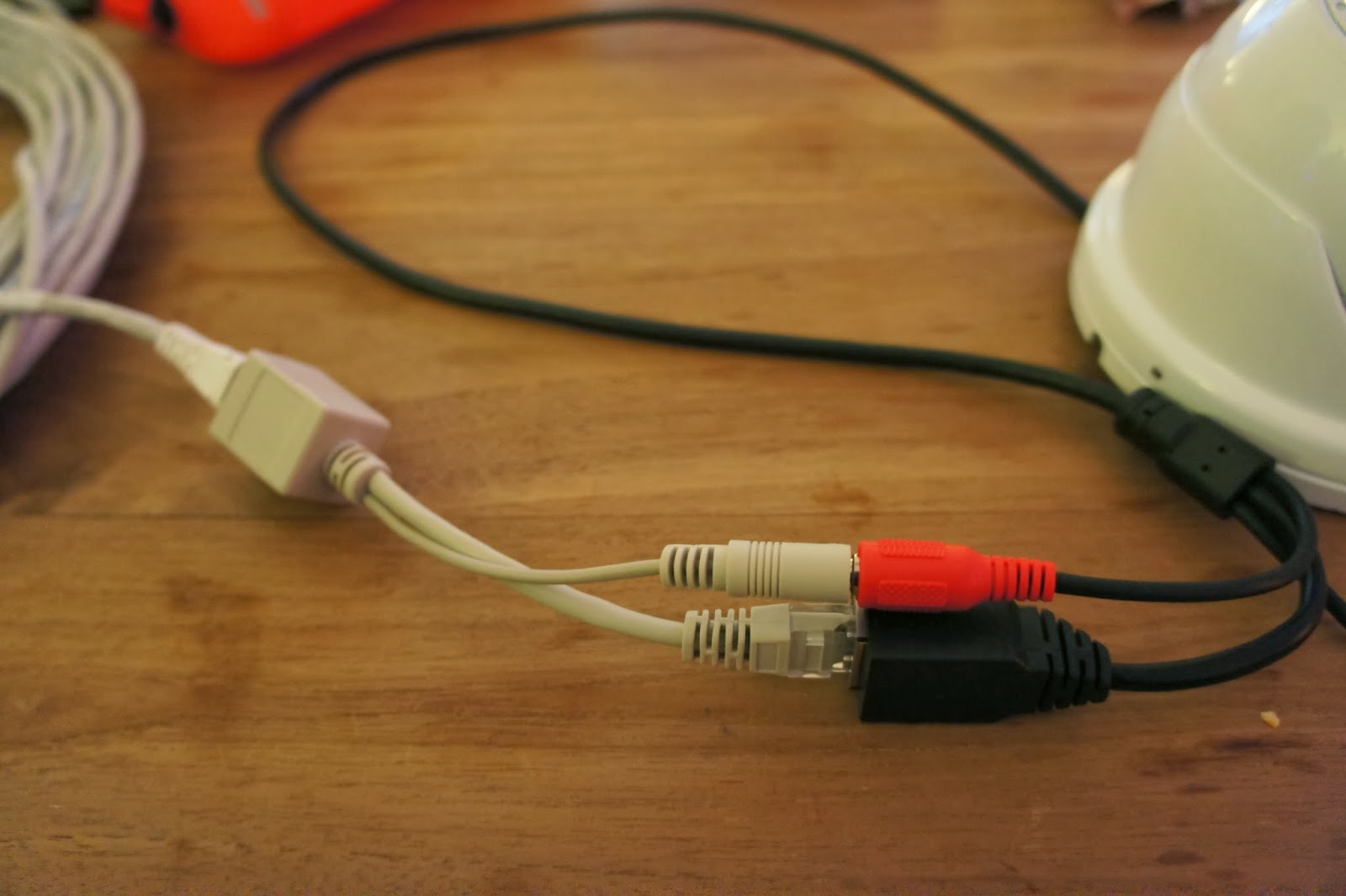 Again, transport UTP cable goes into ‘Extractor’, extractor cables go into power and UTP of the camera
Now test your link and see if it’s working. My cameras all use 12V and have an adapter of 1A or 2A. In my experience I have been able to use up to 30 to 35 Meters of cable without any negative effects, the cameras stay rock solid with weeks of uptime. The longer your cable will be, the more voltage will drop with distance. I believe that my cameras have a variable voltage input and will just draw a little bit more Amps and that is why it works. Your mileage with different equipment and cable quality may vary.
So, this solves the problem of only having a small cable distance connected to the camera and also how to transport both power and data signal over one cable. And since UTP cable connectors can be easily be installed, we can thread the pure cable without connectors through a wall and then attach the connector to it thus only needing a very small hole in a wall.
An adapter such as this will cost you around 3 to 5 euro for a complete set. The only ‘configurable’ about the adapter would be the power plug. This will need to be the same size as the plug on your camera. For my camera’s, they are all the same and use 5.5mm connector with a pin of 2.1mm.
Best source to find these adapters is aliexpress for instance. Here they have a seller selling you a 5 pack for about 10 euro including shipping. Don’t trust prices that are much higher then that, they will be making a lot of profit!
But this still makes the connections susceptible to the elements. For this I also found a cheap solution which has worked quite well!
Here in the Netherlands it’s called a “Kabel Mof” and while not officially rated for all weather conditions, I have not had any problems with it to date. One of these “Kabel Mof”‘s cost 2 euro! 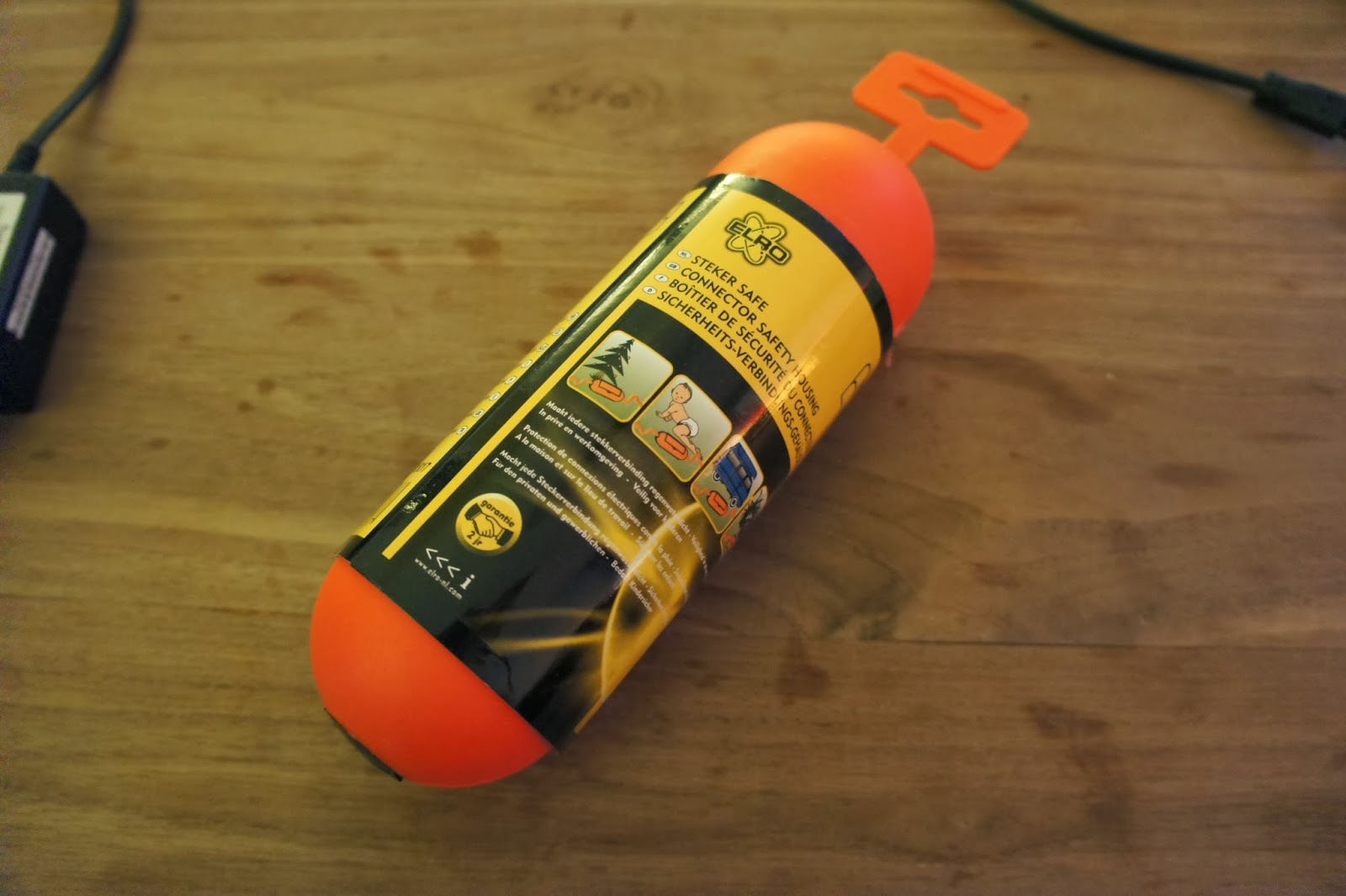 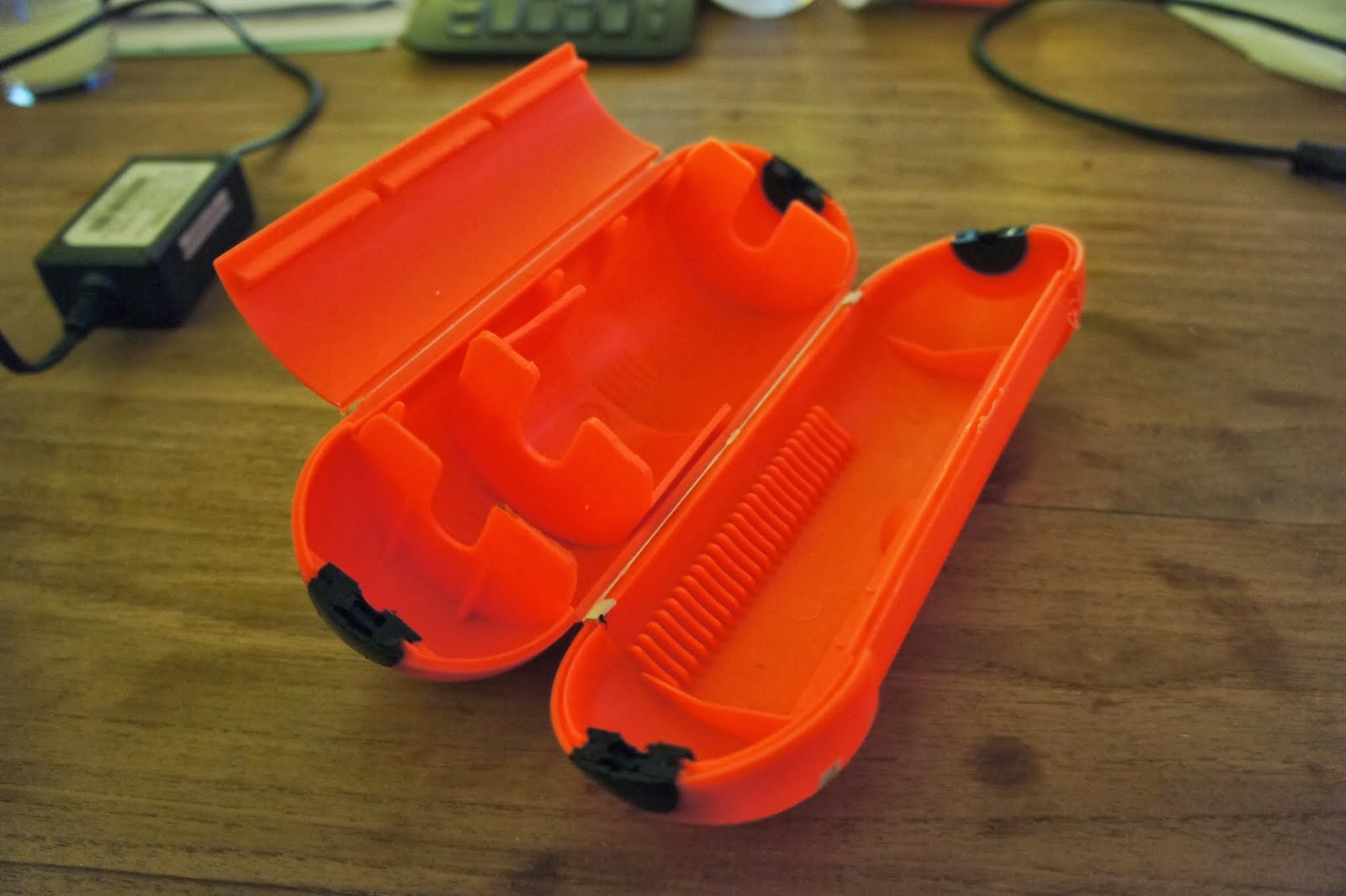 The inside of the “Kabel Mof” 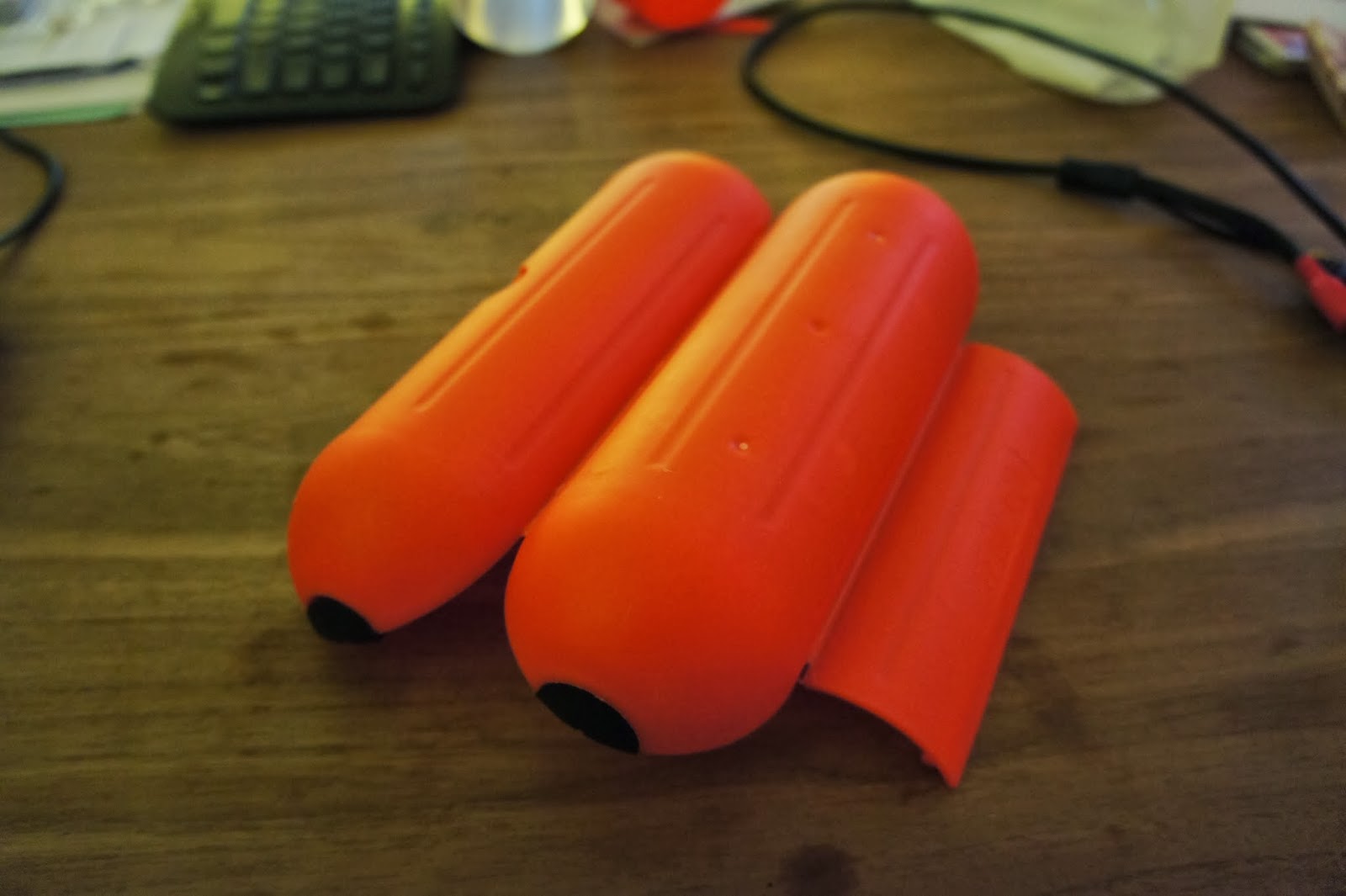 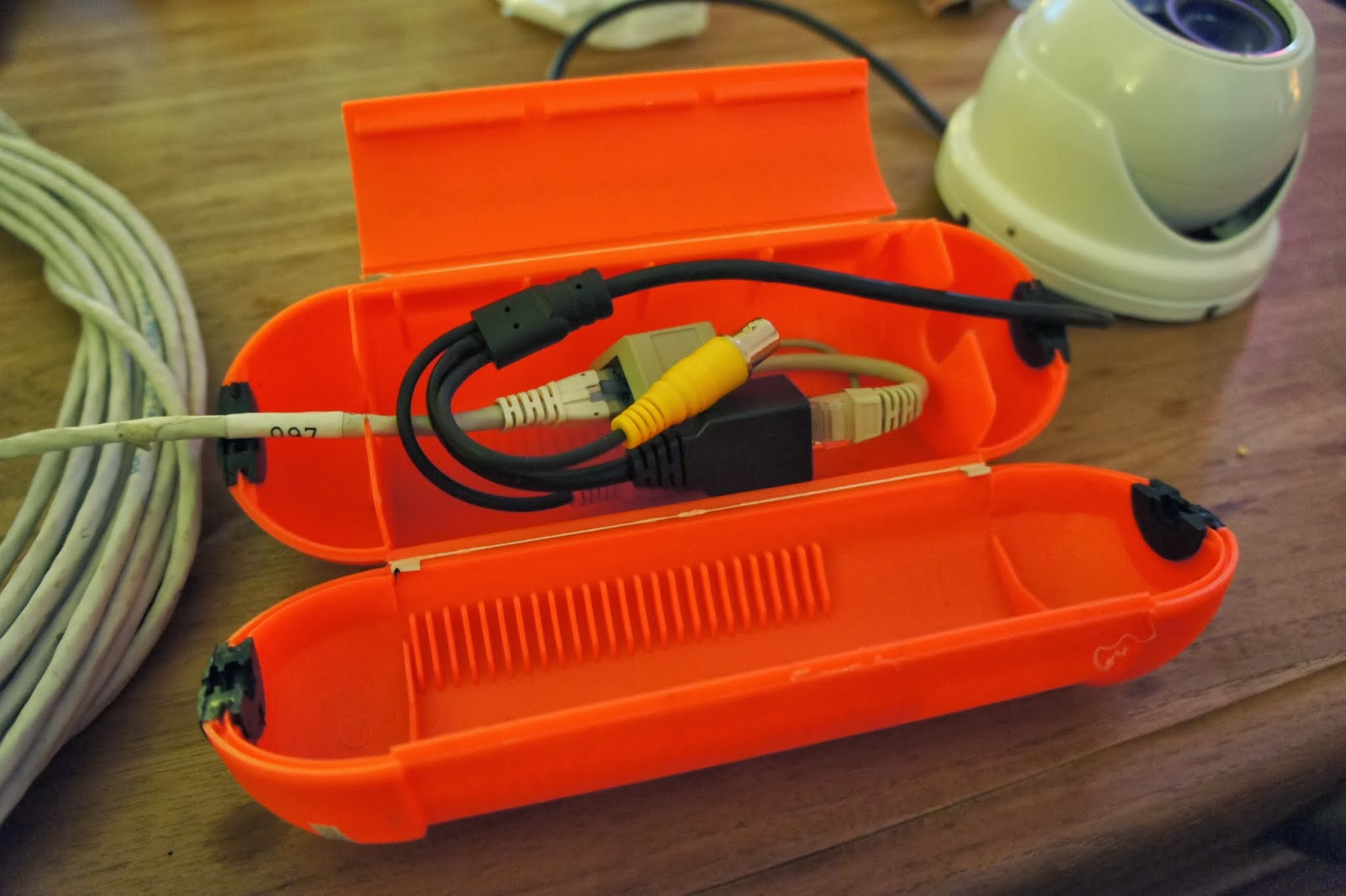 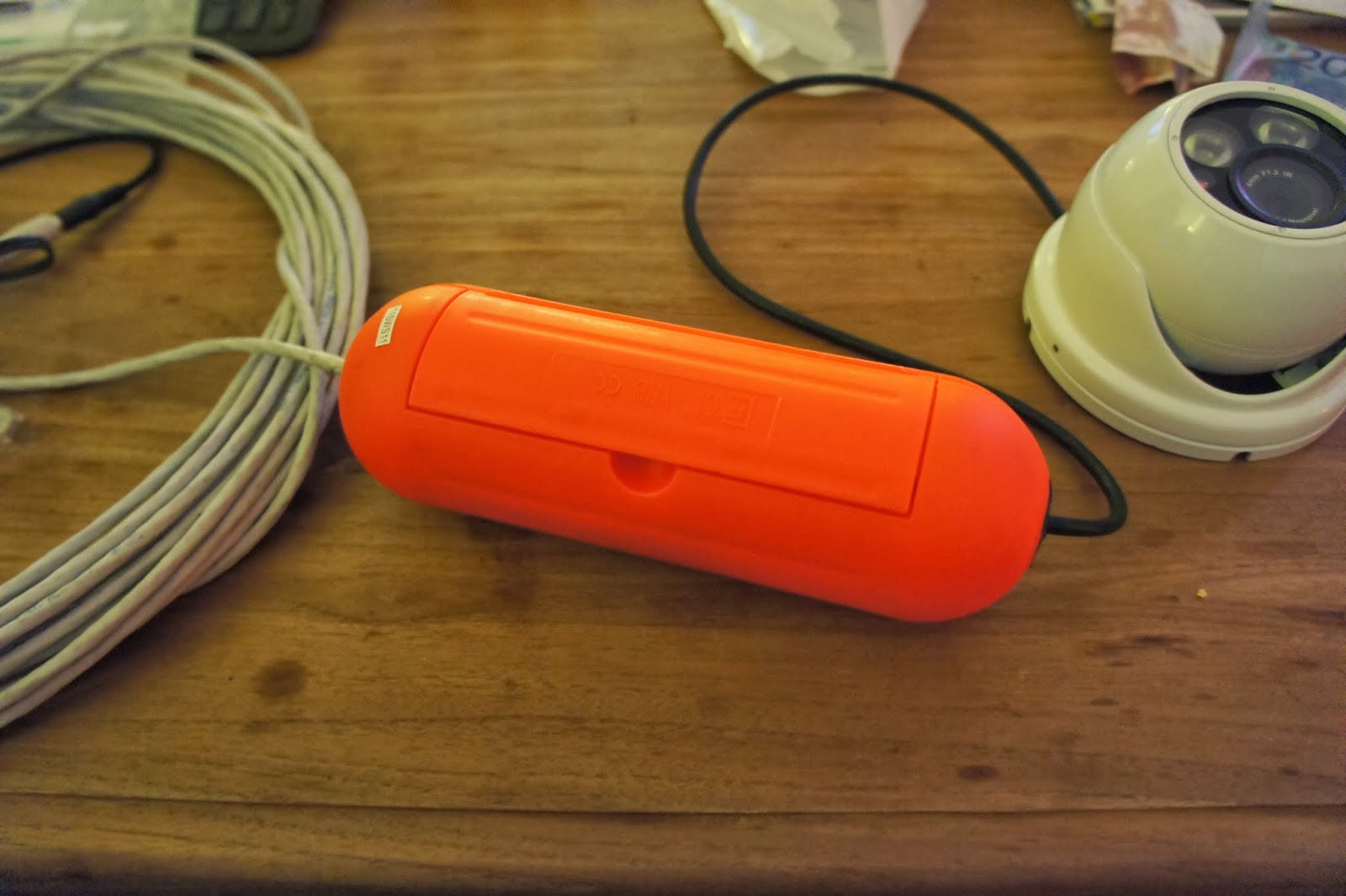 After that, flip it closed and it seals with a sturdy clasp 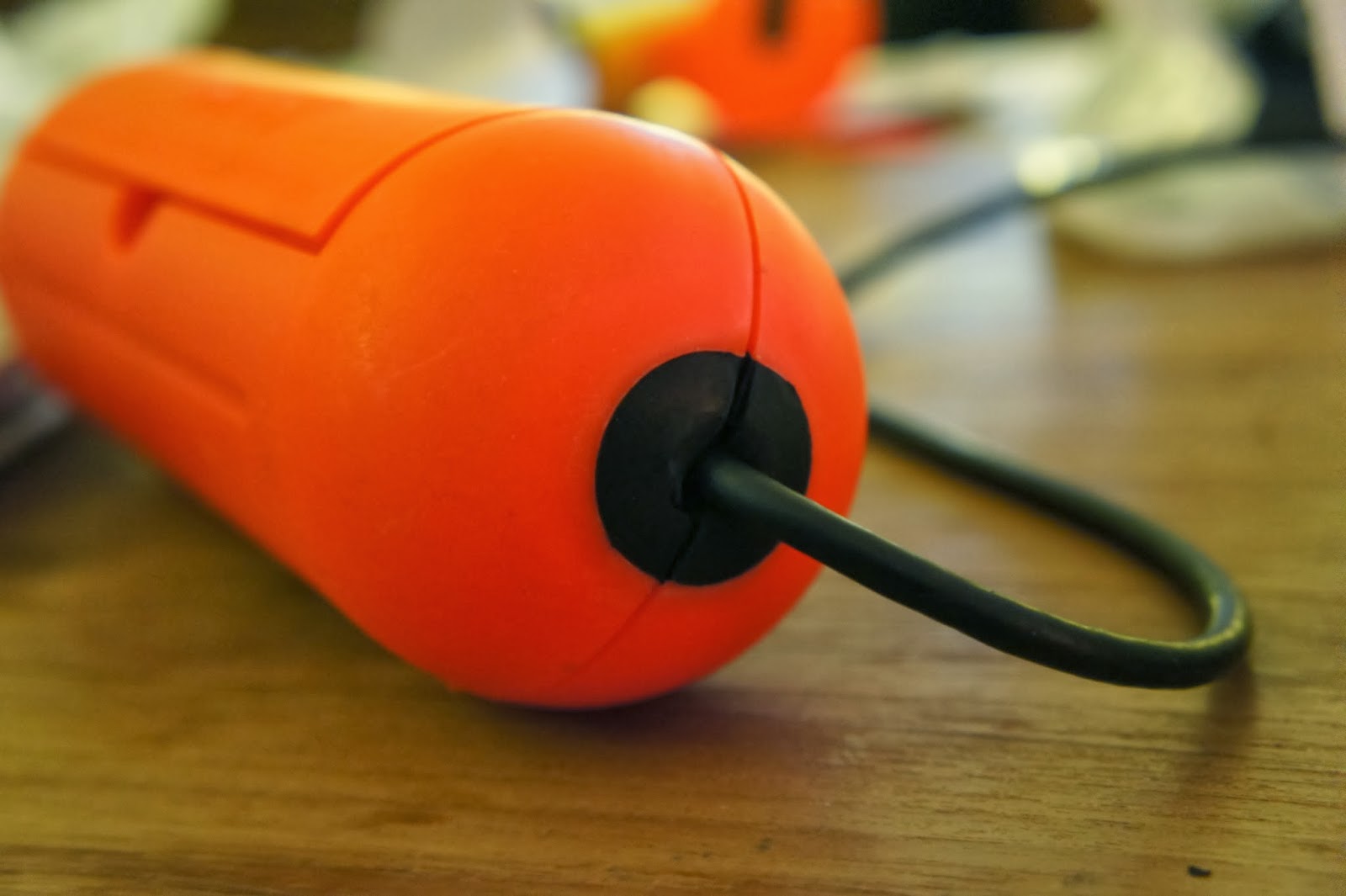 And this is how the cable comes out of it, neat and tidy 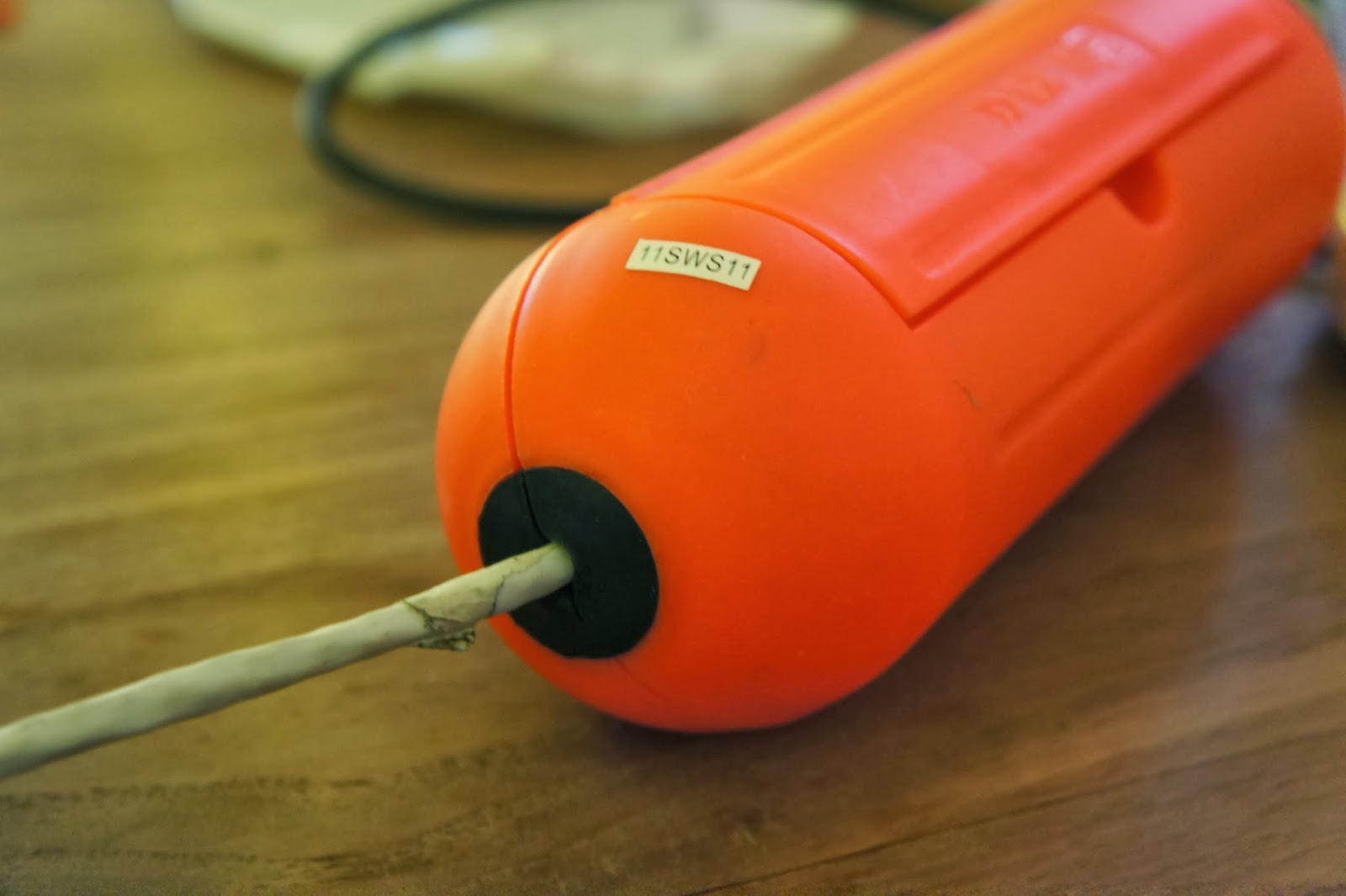 The otherside, if you cannot position the “Kabel Mof” horizontally with the cables hanging down I do advise using a bit of tape on both ends to stop the water from seeping inside with the cables. I do not know it is absolutely necessary, but I have never tried without. 😉 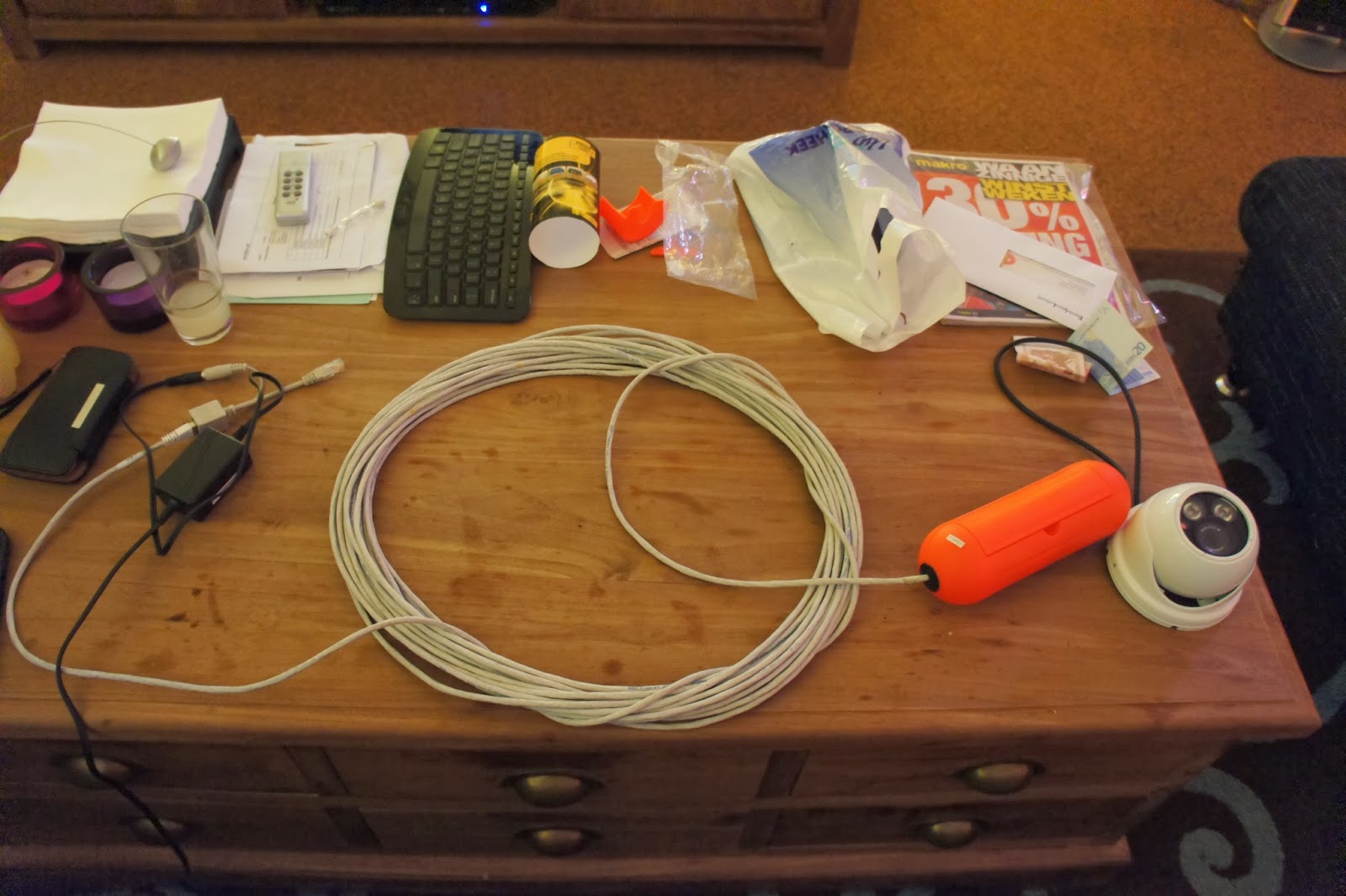 And here we have the complete setup. First the power adapter, that is plugged into the ‘Injector’ which in turn is also plugged into your switch. Then the UTP cable which connects the ‘Injector’ to the ‘Extractor’. The ‘Extractor’ is housed within the “Kabel Mof” making the solution weatherproof and at the end the camera
So now we have a way to transport data and power to the camera over one cable which has easy to install RJ45 connectors and thus can be routed through a wall without a giant hole and even have the connection protected against the elements at the camera side.
Hopefully this helps some people using Passive POE for their IP Camera or other device!
Any Questions or Comments are welcome below!

4 thoughts on “Passive POE for use with Outdoor IP Cameras”