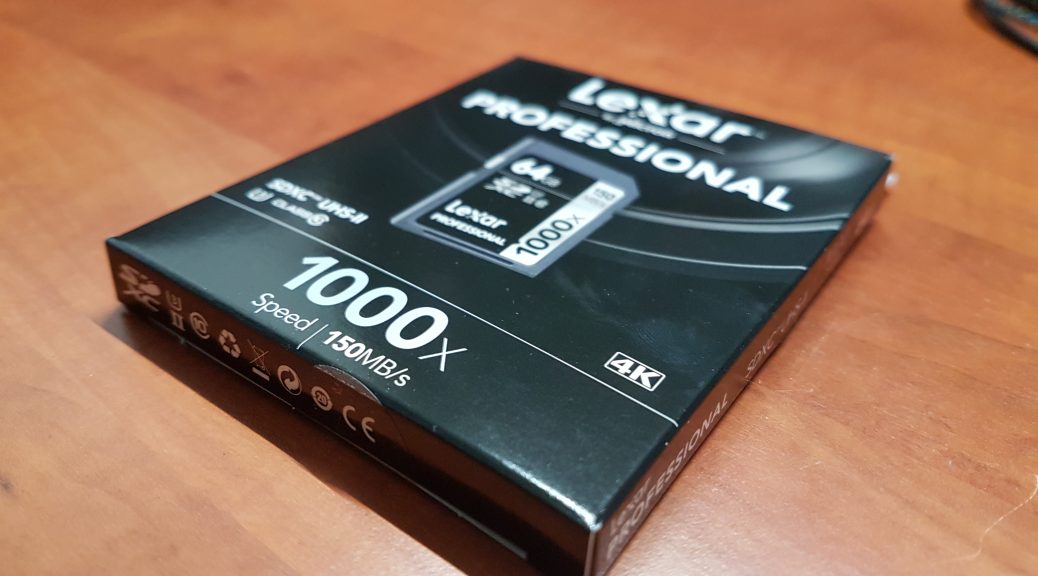 I recently purchased a new camera and needed a new SD card for it. I selected the Lexar 1000x Professional 64GB and before I used it in the camera I ran some tests on it.

Since I’m creating youtube videos I created a little video about the card. It’s mostly an unboxing, all benchmarks will be in this article below the video.

My previous camera used a Transcend SDHC Class 10 card which always worked fine but since I purchased a new camera and it has support for UHS-II U3 I thought it time to switch to something new. The old camera recorded 1080p25 at about ~20Mbps the new camera records video with 2160p30 (4K 30FPS) at 100Mbps! A simple class 10 card would mostly likely not work (I tested the transcend and while it does work, there is not much headroom there and I would not recommend using a simple class 10 card for 100Mbps 4K video recording).

Since I’m always interested to see if a product can actually deliver it’s specifications I have a habit of testing everything I buy, this SD card is no exception!

The 1000x notation comes from the old CD-ROM drives where 1x is 150KB/sec. So 1000x is 150MB/sec, exactly as it says on the packaging. But I guess listing it as 1000x makes it look cool, not sure why those notations are still being used.

The 1000x  is always the read speed and does not say anything about write speeds. The U3 that can also be seen in the specifications specifies the minimum write speed the card can sustain. Class 10 does the same thing, but for an older standard, basically it means the card can always sustain 10MB/sec.

UHS-II specifies the interface the card communicates with. UHS-I has been along for a few years now but was limited to 50MB/sec and later 104MB/sec. But as always, technology progresses and now we have UHS-II which can do a maximum of 312MB/sec (or in the case of this card 156MB/sec. Take a look over here to see the official specifications.

On the packaging it also states that write speeds should be around 75MB/sec. Basically half of the read speed.

The card came formatted as exFAT and I didn’t reformat it before testing.

All benchmarks where run using a Transcend USB 3.1 (Gen 1) TS-RDF9K on a Intel USB3 port using the included cable directly connected to my motherboard.

This reader is capable of at least 260MB/sec read and 190MB/sec write. But since it’s fully UHS-II compliant it should be able to reach even faster speeds with a card that supports it.

To start off some ATTO Disk Benchmarks. 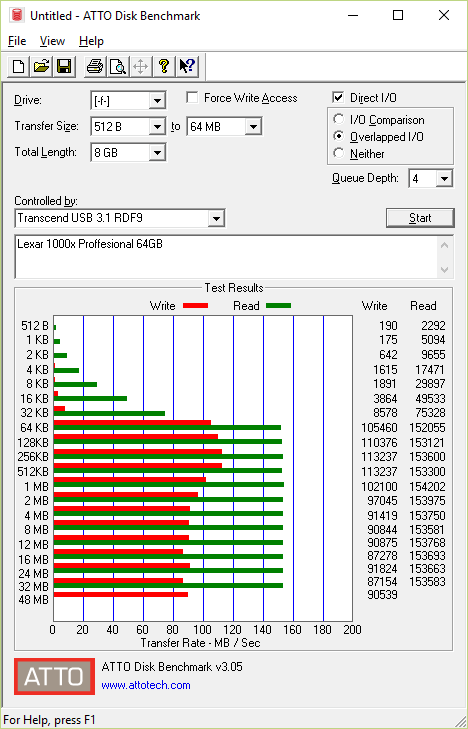 As you can see the card performs very well. Reads after 64KB are at the specified 150MB/sec and writes actually over perform starting from 64KB to more then 100MB/sec! Officially the card is only rated at 75MB/sec. 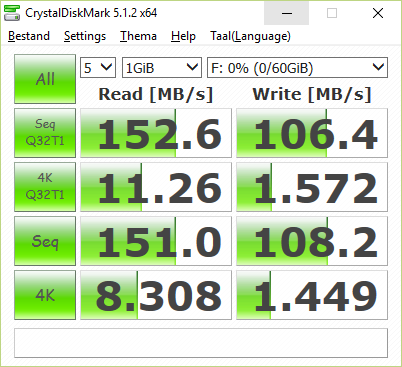 CrystalDiskMark seems to show the same numbers. For the 1GiB test reads are ~150MB/sec and writes are ~106MB/sec on average over 5 tests.

Here you can see though that although the card is very good at writing sequentially, it basically sucks for random work loads. Especially random 4K write speeds are basically in the mechanical harddrive territory.

Random read is pretty decent though. 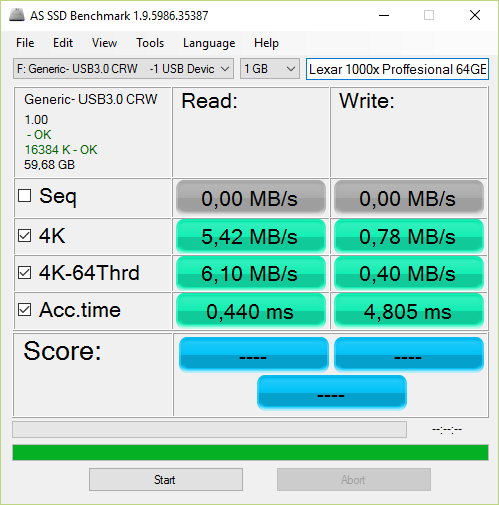 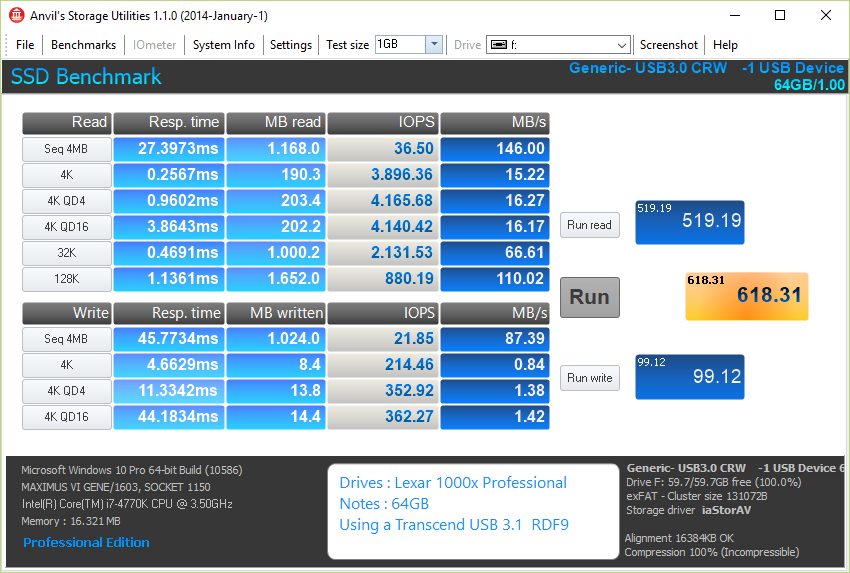 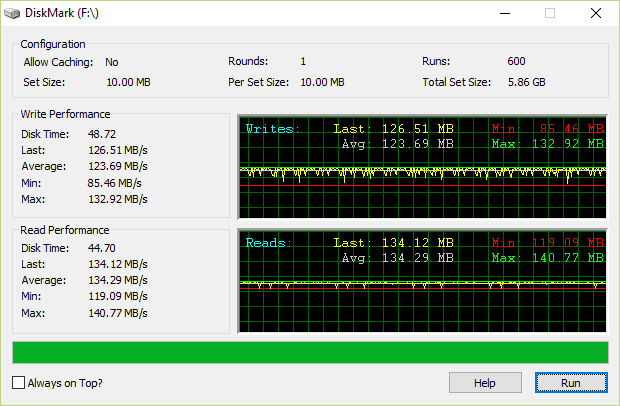 I also ran 2 tests with DiskMark. The first writes 20GB of 512KB blocks in which it performed very well in both read and write.  20GB would equate to about 34 minutes of video recording which is the limit my new camera can record in one session. The second simulates writing blocks of 10MB (Basically 100Mbit) to see if a sustained data rate of large blocks posed a problem. 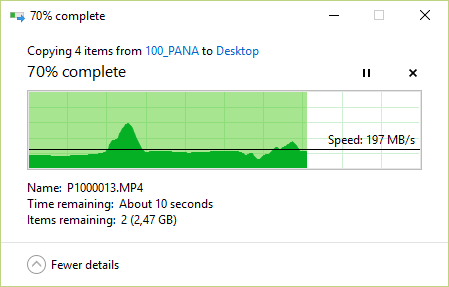 As you can see during a real world file copy it also achieves good speeds. On average it’s around the 150MB/sec the card is rated for which makes copying the files off the card VERY fast. I always offload my video and photo files to my server which means my 1Gbit network connection has become the limiting factor!

Be mindful when buying this SDcard, to get the best transfer speeds, make sure you buy this card for cameras with an UHS-II interface. Otherwise you are just paying more money for the same performance a UHS-I card would have had.

As can be seen above the card performs very well in sequential (both read and write) workloads. What the card isn’t very good at is random write. It’s quite slow actually! But, since random write (almost) never occurs with a media/camera workload and random read (looking back at pictures, etc.) is fast, that is of no concern for that scenario.

If you would want to use this SDcard for any other workload though, take that into consideration.

In conclusion this card performs very well for it’s intended purpose. So I would highly recommend it for usage with a digital camera! If you’d like to buy the Lexar 1000x Professional 64GB you can do so over here on Amazon (US)! They also have the card reader to use the card to the fullest of it’s potential!