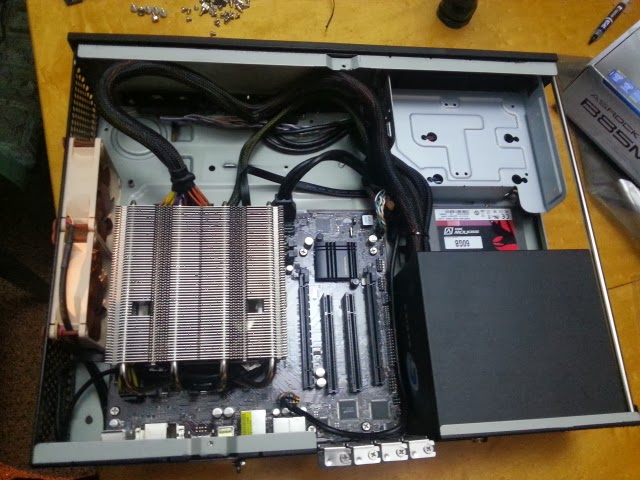 A while back I built myself a powerful PC based HTPC and today a friend asked me to design one for him. Since I have it all figured out anyway, I can just as well put it up on here. 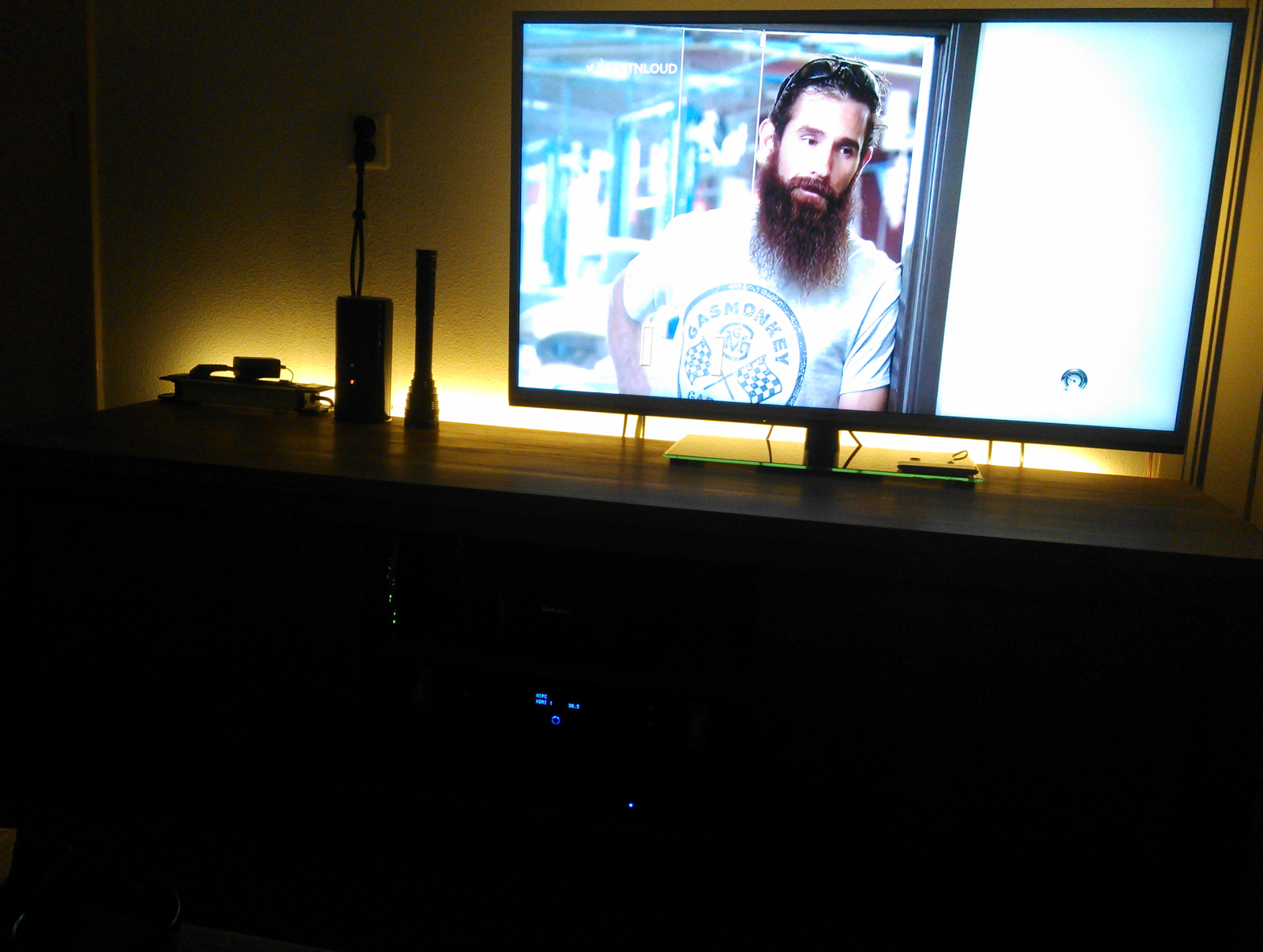 Over the years I have owned several HTPC’s. Each with their own unique quality.

The first was a Triple-Core AMD which worked really really well. After a while I did add an NVidia card because of some issues I had with the onboard graphics, but we’re talking about the beginning era of onboard graphics which where barely usable at that time. I loved that HTPC a lot, it had a nice case and everything, but I had to let it go because the Idle usage was above 100 watt. I got the heavy processor because I was unsure if the onboard videocard would be able to decode everything I want to watch (including 1080p60 and Hi10 Anime encodes) and with the heavy CPU I was sure it could handle anything.

After that I tried a passivly cooled Artic NC001-N. This was a dual-core Atom based machine combined with a notebook ATI Radeon card. It worked okay, but I was never really happy with it. I like performance and quickness, and well, this machine just wasn’t it. Also the idle power usage was still above 35 watts which I do not find acceptable for the performance. I got it cheap and it lasted me a year, so it was a nice try, but moving on!

The third one is my current Haswell HTPC. I went back to my original design, get fast enough onboard graphics, but keep the CPU in there if needed, now, or in the future. And so far, I’m enjoying it a lot, it’s a great little system! But let me remind you, this is not a cheap/budget system, this is a good system but does spend money where I believe it’s needed.

So, what did I build and why:

Chassis:
A Silverstone MILO ML03      ~75 euro
A very nice little chassis. It’s the perfect size for intergrating your HTPC with the rest of your HTPC setup because it’s the same 35cm in width as the rest of your audio equipment. With it’s 10cm height it both compact and spacious on the inside, perfect!

It takes a normal ATX PSU, but is still a shallow depth. Has enough room for cooling, I like it a lot.

I kind of wanted an ML04 but since I needed to wait an extra week for it I went with the ML03. It’s dark in the corner of the room anyway and only the front face is different, the rest of the chassis is the same. You can see some photos below.

PSU:
A Seasonic G-360      ~60 euro
I’m a fan of Seasonic PSU’s, they have always stood for quality and efficiency like no other. Combined with rock solid voltage rails and low noise, it’s the ideal PSU in any case.

The new G series is a bit lower cost, non-modular 80Plus Gold rated CPU. Since the system will never use more then about ~120 watts in total, the lowest 360 watt option is perfect for it. The idle efficiency of around 25 watt proves this!

Motherboard:
ASRock B85M (Get the Pro)      ~65 euro
I bought an ASRock B85M because I wanted to experiment with ASRock. I had been hearing good things about them and the price is a bit cheaper then Asus which I normally use.

The board has HDMI, DVI and DSUB video ports and also comes with an Optical SPDIF if you wish to use it. Onboard chip is not important because I am using sound streaming using HDMI, so the DAC in my receiver will be used at all times.

It doesn’t disappoint, it’s a good little board and has good features. It’s been stable, efficient and cool so I’m quite happy with it.

The only thing I wish I had done different is not get the ASRock B85M but the ASRock B85M for about 5 euro’s you get an Intel NIC instead of a Atheros based card, which I would have much preferred.

Too be honest, a simple Dual-Core i3 would have been plenty of fast for almost anything you would want to do. But since I wanted to prevent myself from ever having too little power, even in a few years, I went with the Quad-Core. Idle usage shouldn’t differ too much and in the end I did manage hitting my low idle target of under 30 watts. Currently the system idles at 25 watt.

Going with a Dual-Core though should be plenty fast, even for Hi10 Anime and it could save you a little bit of money and power usage. I’m hoping the CPU will allow me to decode H.265/HEVC in the future without forcing an upgrade. The choice is yours!

CPU-Graphics:
I have tested the HD 4600 decoding capabilities and it handles everything very well. It’s even able to decode 1080p60 and 4Kp24 H.264 (Displayed at 1080p) fully in hardware and without dropping frames.

Using the newest Intel drivers you get a good 23.98Hz sync in Windows or Linux. Audio out of HDMI mostly works, I do have some problems with DTS-HD and LPCM but I believe those to be more receiver related then anything else.

Memory:
Crucial Ballistix Tactical, 8GB 1600Mhz CL8      ~65 euro
A Dual-Channel kit of 1600Mhz CL8 memory. Haswell loves clock speed for it’s onboard graphics and well, a lower CAS rating is always better. As you can see the memory only just fit under my cooler! So getting 1600Mhz memory is especially important if you are using the onboard HD4600 like me.

Storage:
Kingston V100 64GB SSD      ~50 euro
As storage I bought a cheap Kingston V100 60GB SSD. It needs to boot and start XBMC, not much else. Often I just run OpenElec (a very tiny linux distribution which just runs XBMC) but lately I have also installed Ubuntu so I can use Spotify to.

All my media is housed on my ~20TB file server which is connected through Gigabit.

The CPU cooler was a bit of a challenge because of the limited height that can be used. The case allows for about 70mm of height for the cooler (motherboard is counted with that). It turns out that my favorite cooling company (Noctua) had a good solution!

The Noctua NH-L12 is not a tower cooler but more of a heatpipe-sandwitch cooler. Normally this cooler comes with a 120mm FAN on top of the heatsink and a 92mm below it. Both fans are excellent high efficiency, low noise Noctua fans!

In a restricted height situation and with a lower wattage CPU’s Noctua says that you can also use it with only the lower 92mm cooler and that is exactly the setup I am using it in.

I am using the FAN to blow air downwards. This way the coolest air should pass through the top of the case (It has a special grill there to allow air to flow in).

For the case I use 2x NF-R8. This should have been PWM versions (PWM is always better) but those where not available yet at the time I built this system. The PWM fans get delivered with a PWM splitter cable to hook both fans up to the same motherboard FAN header. The non-PWM version needs both case fan headers on the motherboard but also work.

All fans are temperature controlled using the motherboard headers and run at minimal level unless you generate a lot of continued load.

About that, in testing the system I was able to get the CPU to throttle in extreme situations. This meant loading the CPU with an AVX2 CPU benchmark AND loading the GPU to 100% too. After about an hour, in a confined space, the CPU would throttle slightly, nothing horrible, but not desirable either.

In a real would situation, this should never happen, because AVX2 instructions are not used by any software, especially not with a 100% load on both the CPU and GPU.

In the past 2 months, even when running normal CPU & GPU tests, it never throttled or presented me with any other problem. Nominal load while playing 1080p24 is about 4% CPU usage and 30% GPU usage. The CPU stays a cool 35 degrees C.

Final Thoughts:
It’s a great system which has been running perfectly for the past 2 months. I have used Ubuntu 13.10, OpenElec (also on USB) and Windows 8 on it without any big issues.

Idle power draw is about 25 watt and while playing 1080p24 it uses about 35 watt of power. Very wel within the budget I wanted to achieve and it does so in complete silence. I need to put my ear almost on the chassis to hear anything!

Any questions, comments or other remarks are very welcome below!

But first, some pictures: 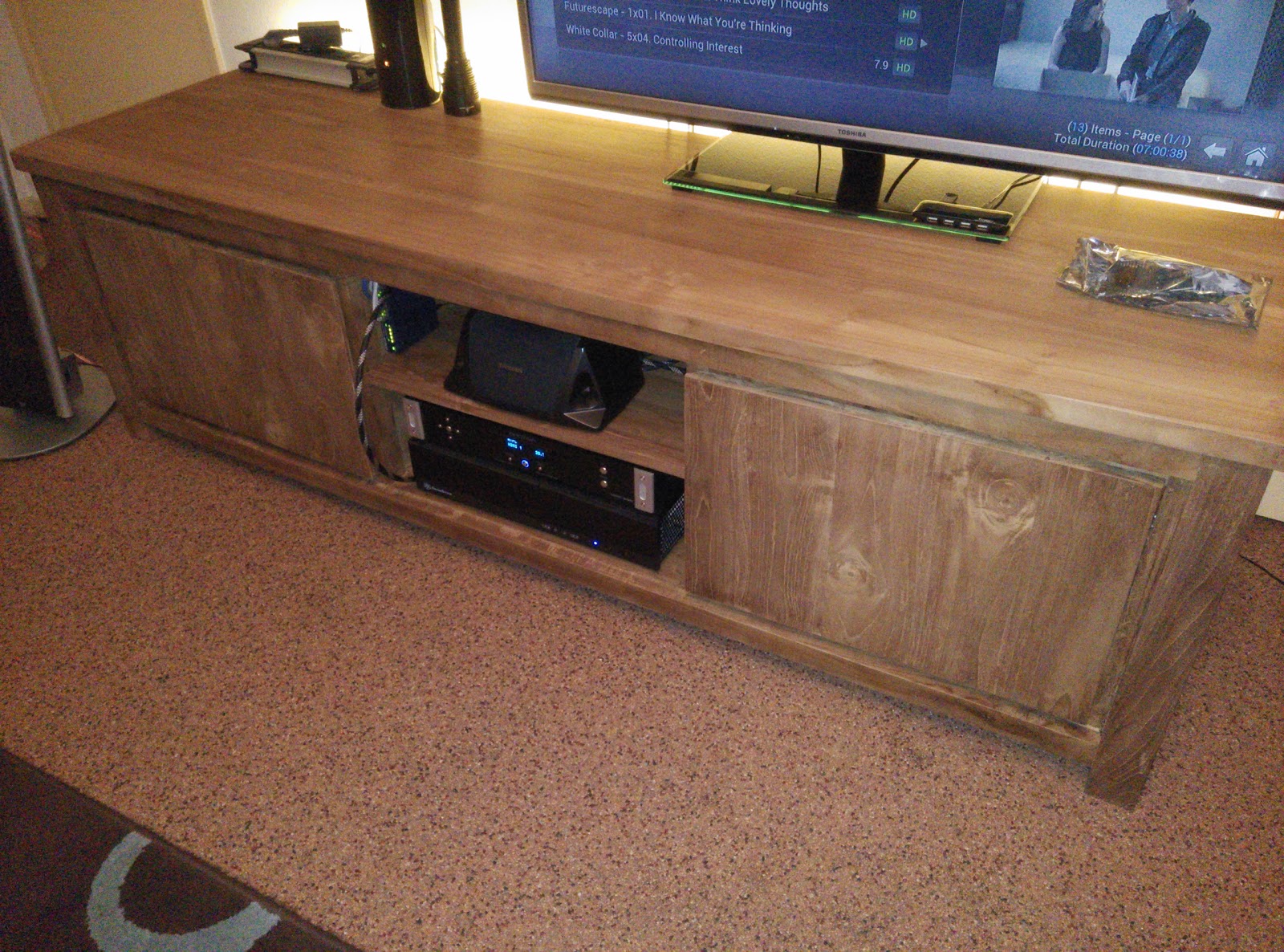 Snugly in place, but mindful of it sucking down air and blowing it out of the right of the chassis 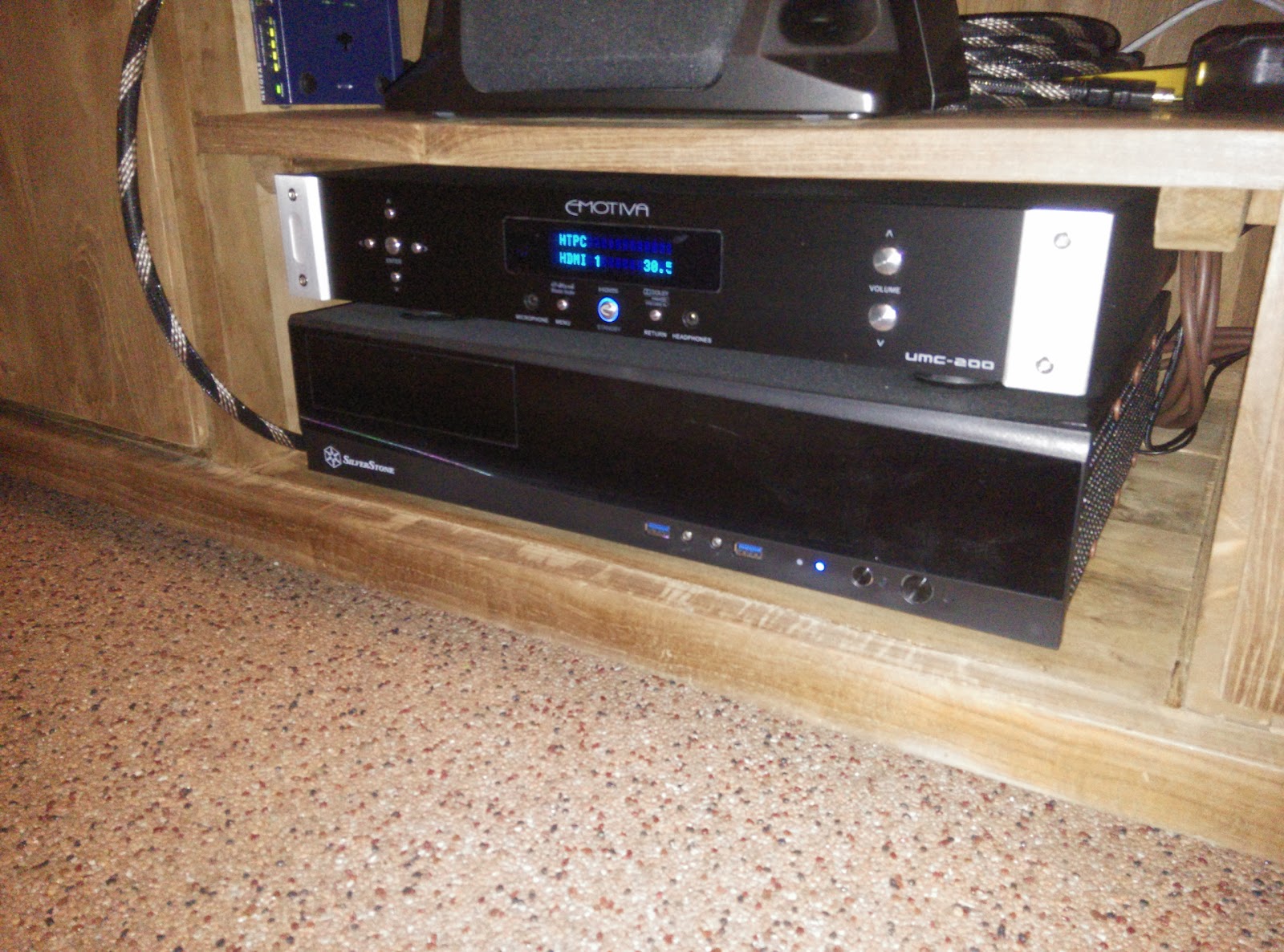 Exactly the same size as my receiver (UMC-200 from Emotiva) 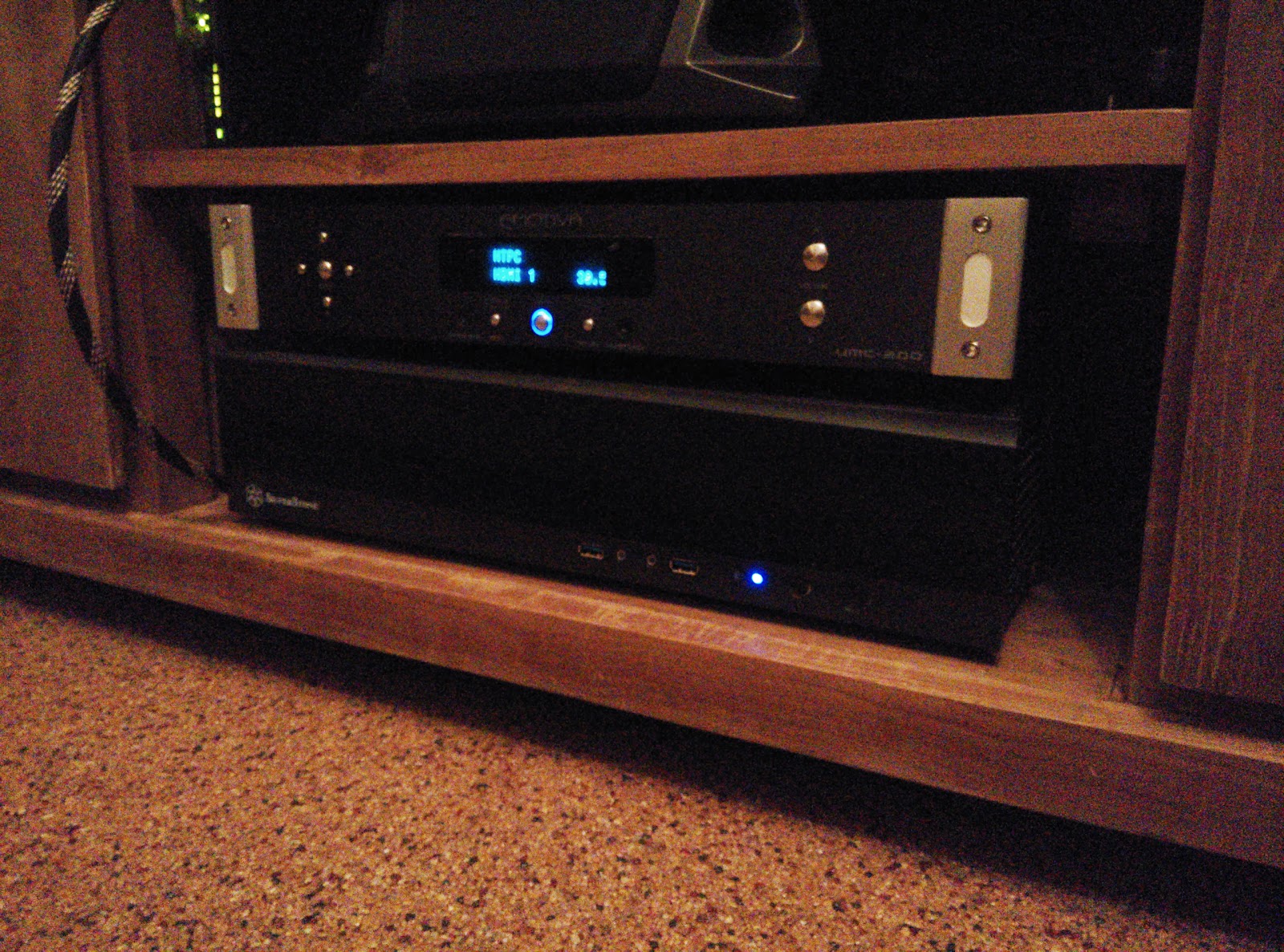 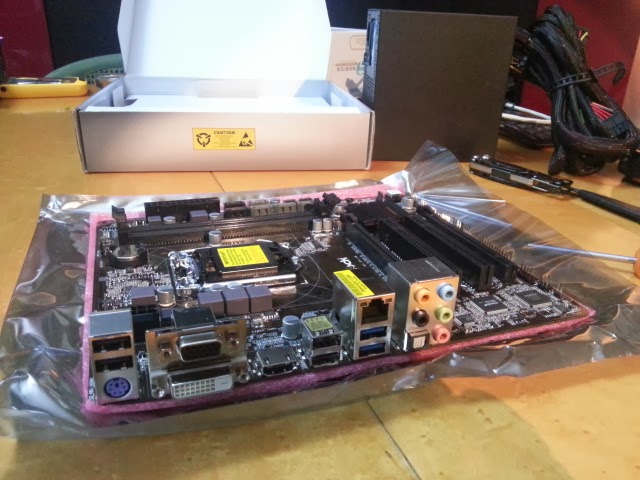 Bare Motherboard, I love the unique “In BIOS update over Internet” feature! 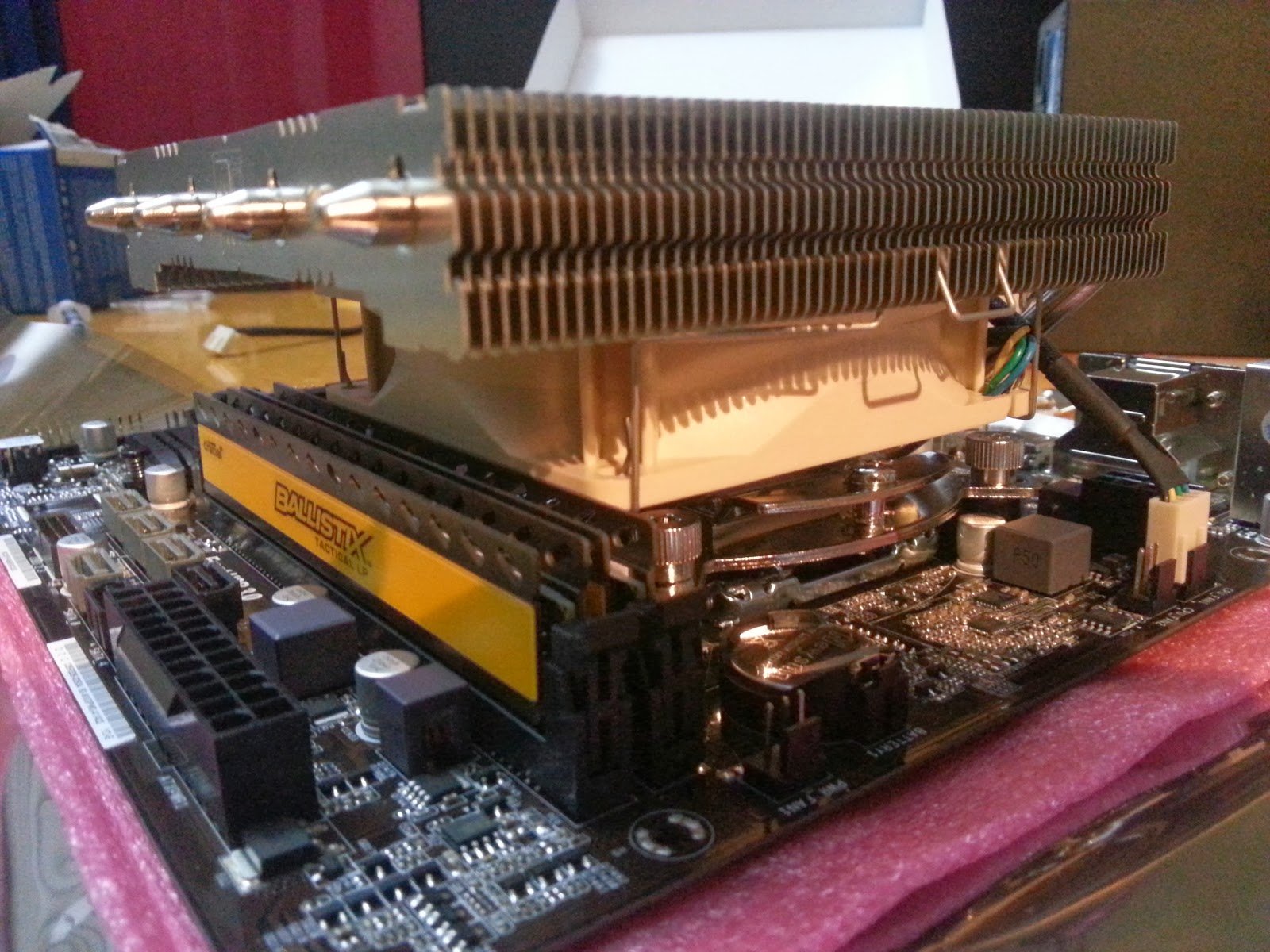 Tighter fit then I had anticipated, but it fit! 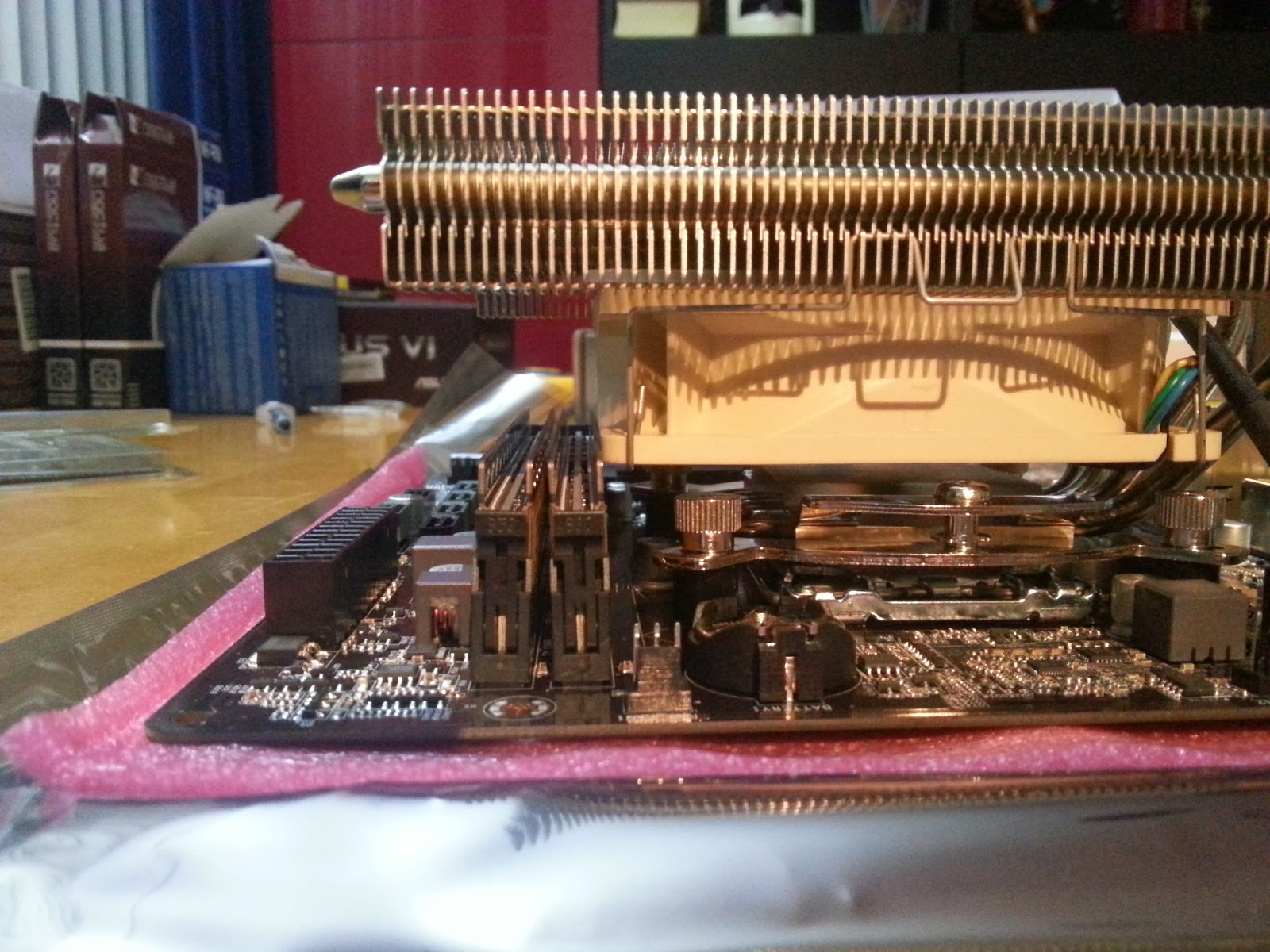 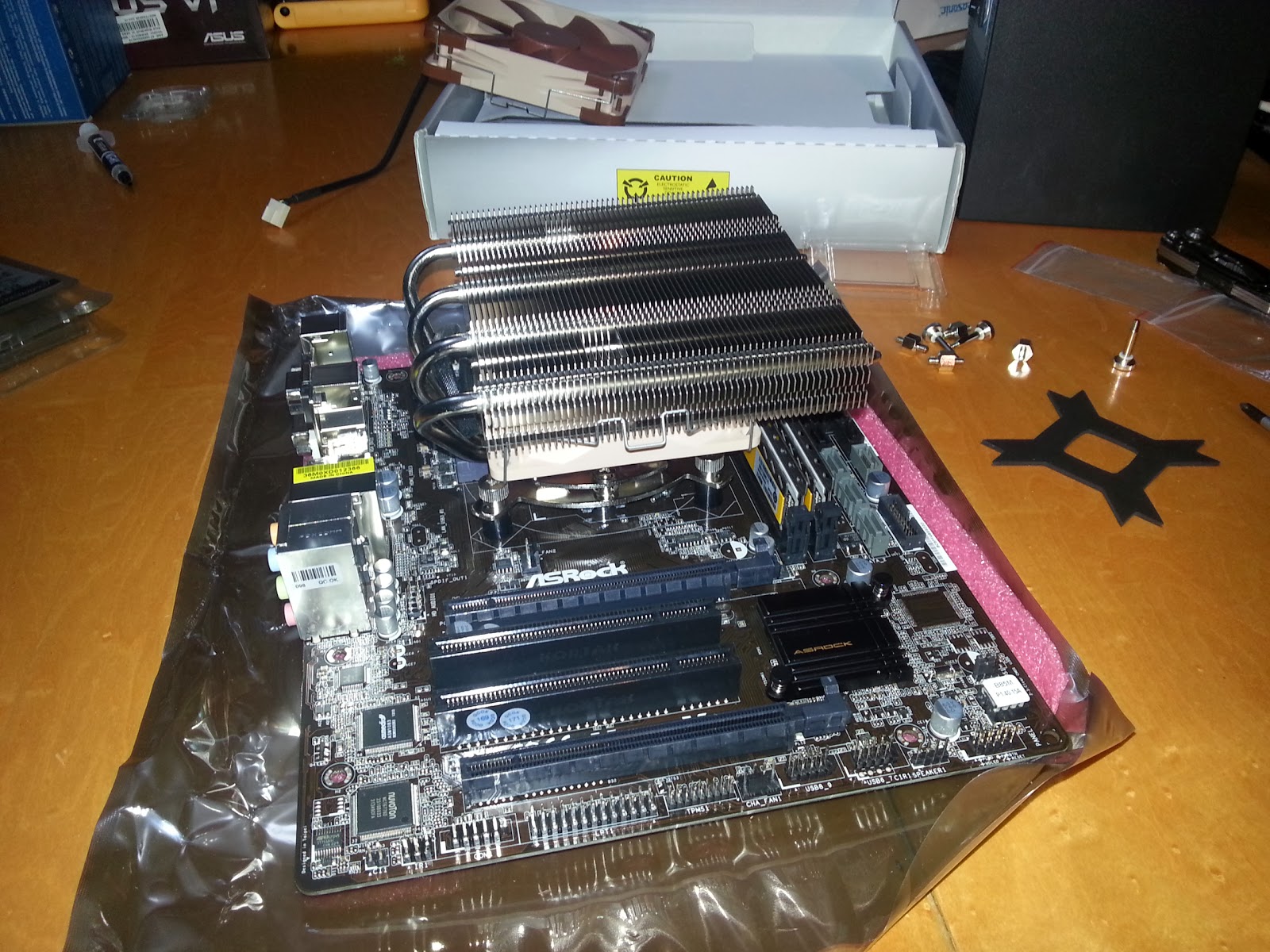 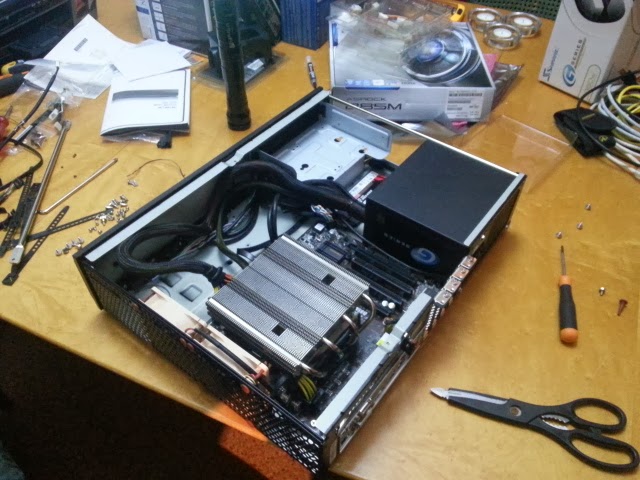 More then enough space left to put SSD’s, I ended up storing most power cables inside of the metal drivebay holder. The cables you can still see are there because of being attached to the motherboard and also include front-panel USB3. Use the included rubber mounts for the fans. It’s bit hard to get them to stick, but once their in place it will help dampen any noise 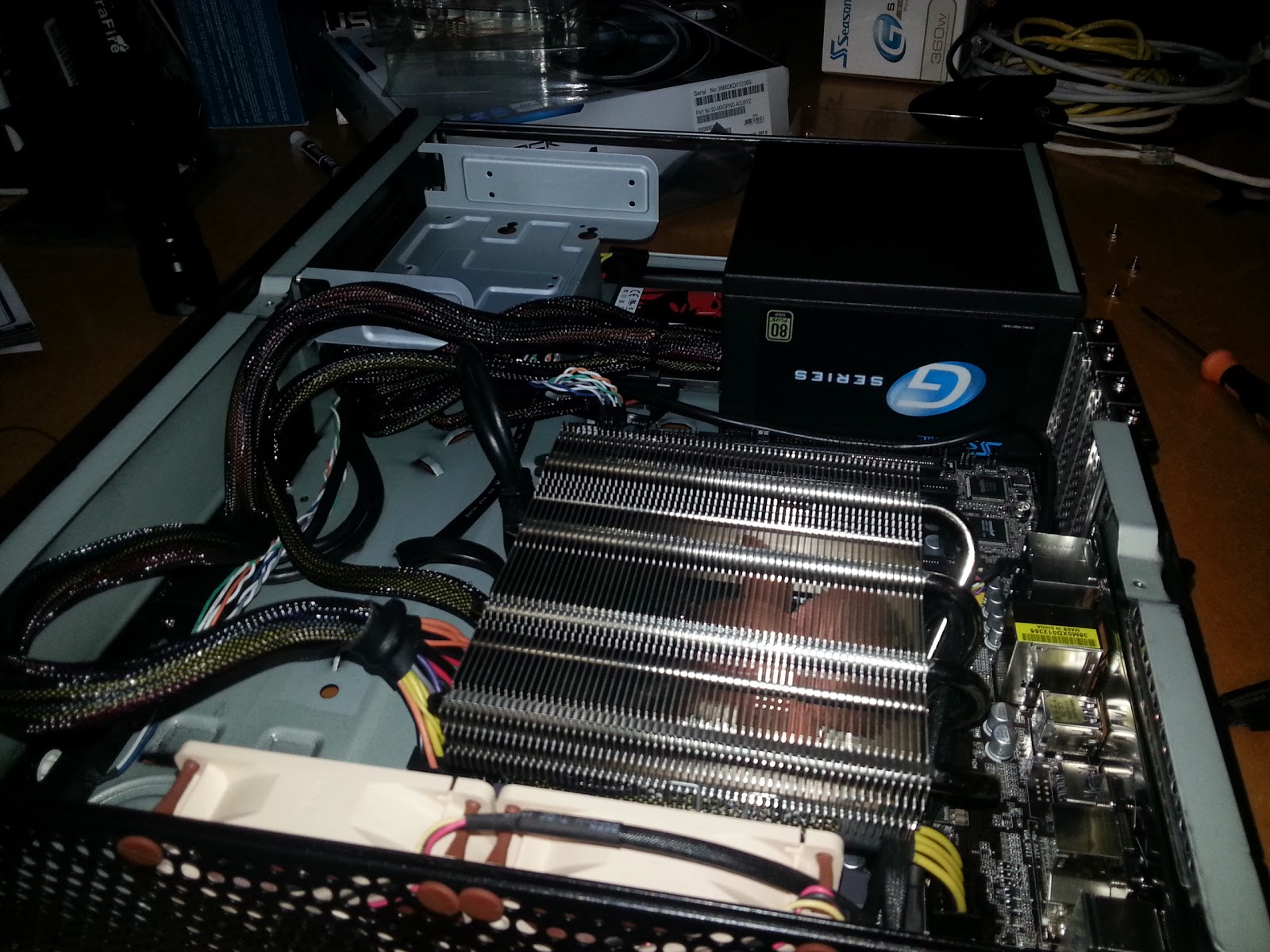 It all fits perfectly 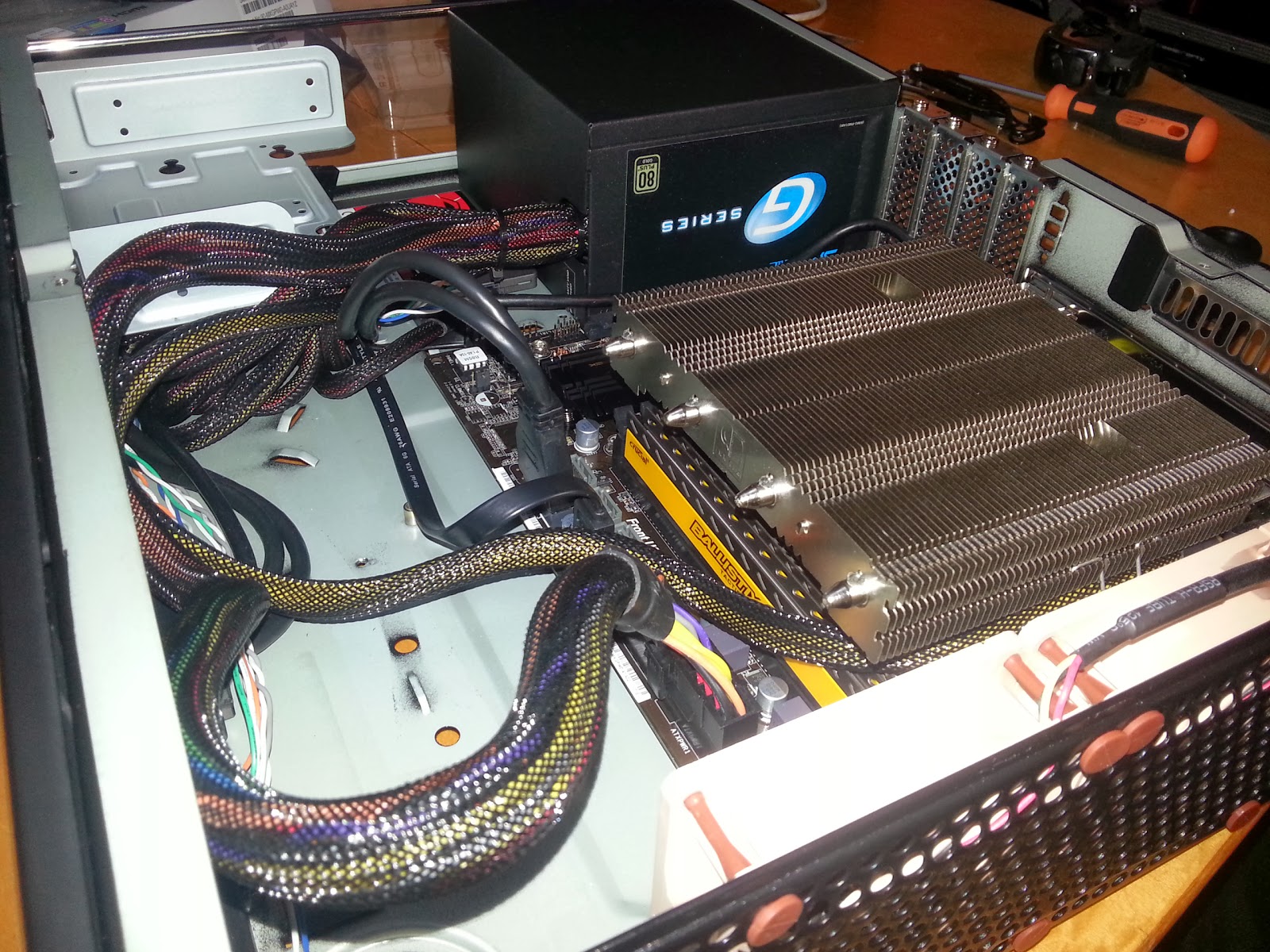 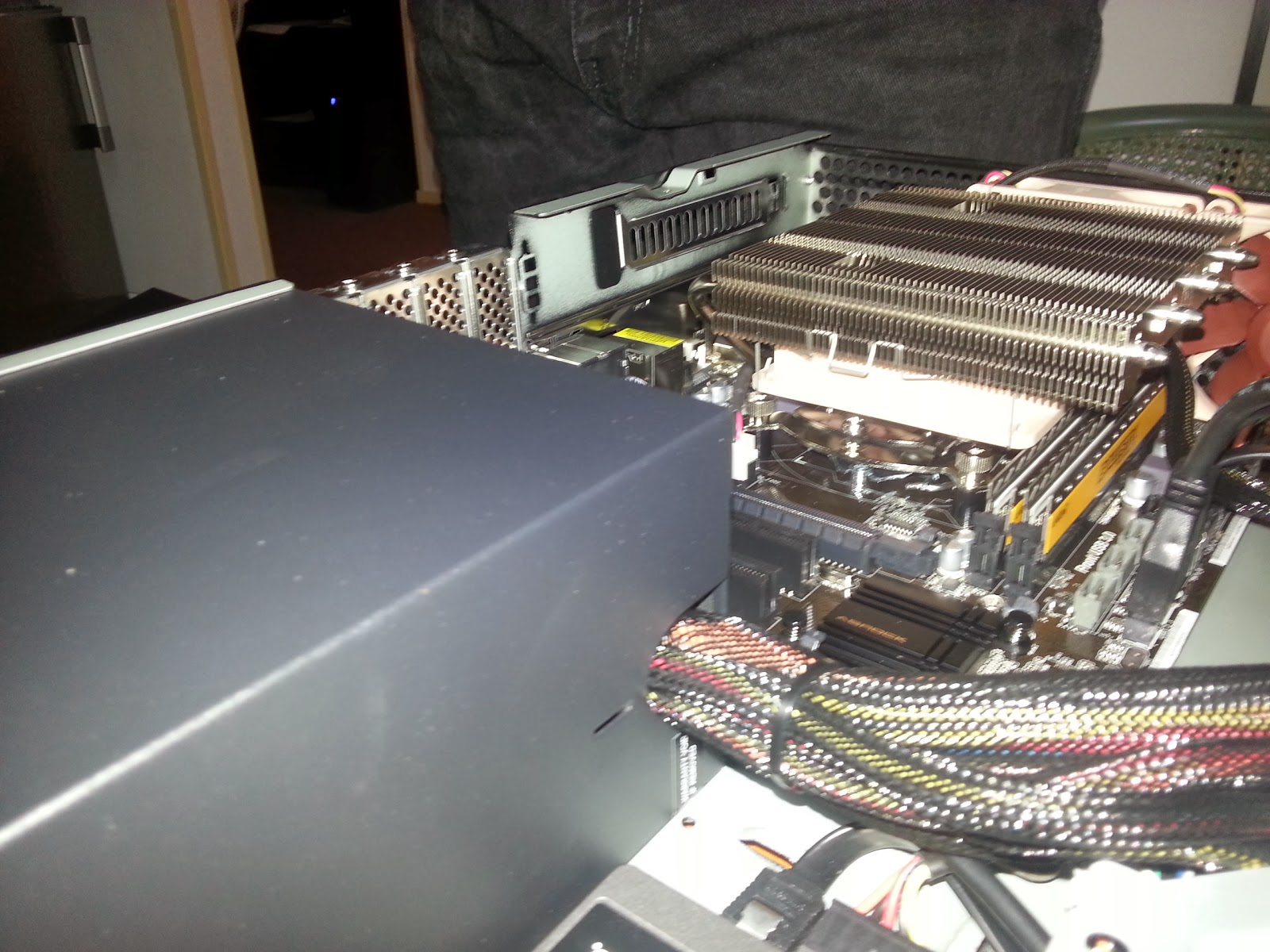 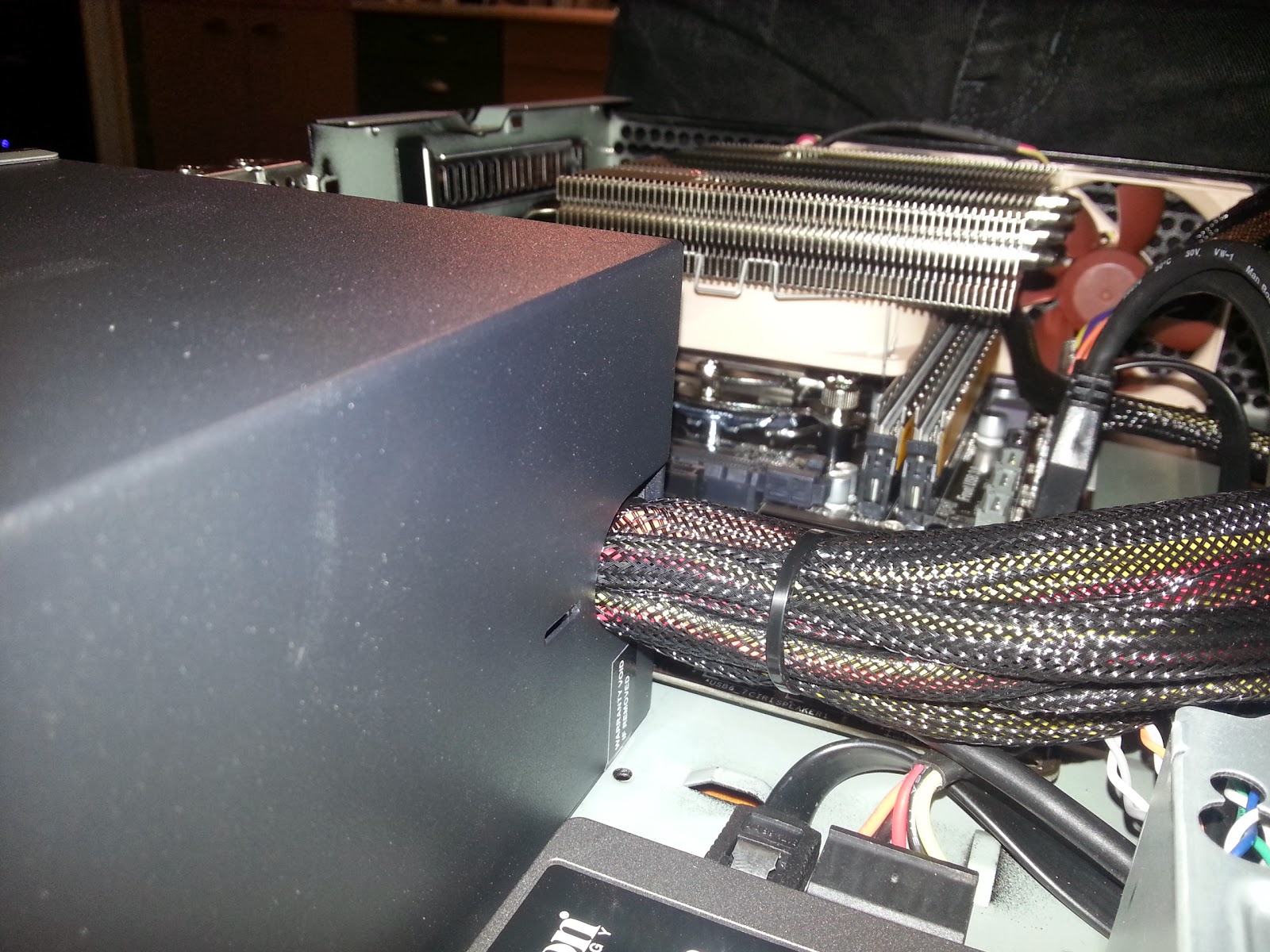 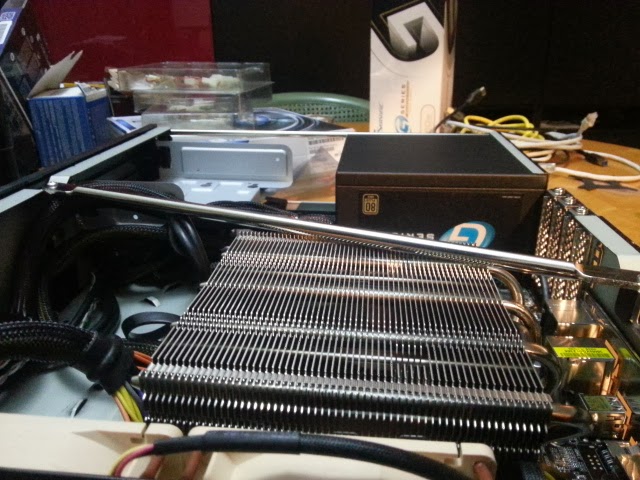 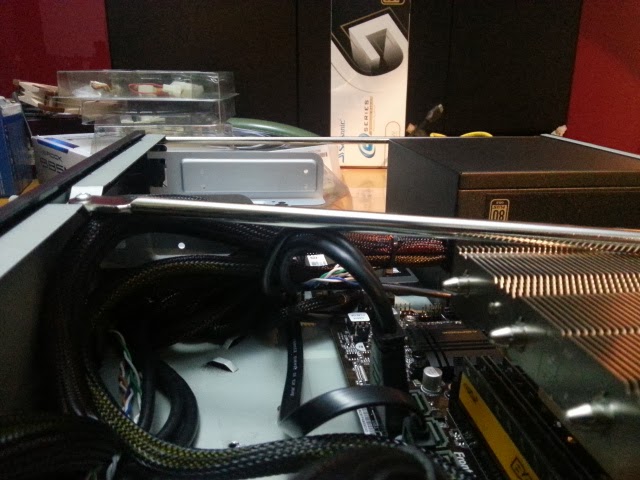 All nice and snug with ample room for airflow. The chassis has holes for the PSU to suck in air on the bottom.
Again, comments or questions are very welcome!