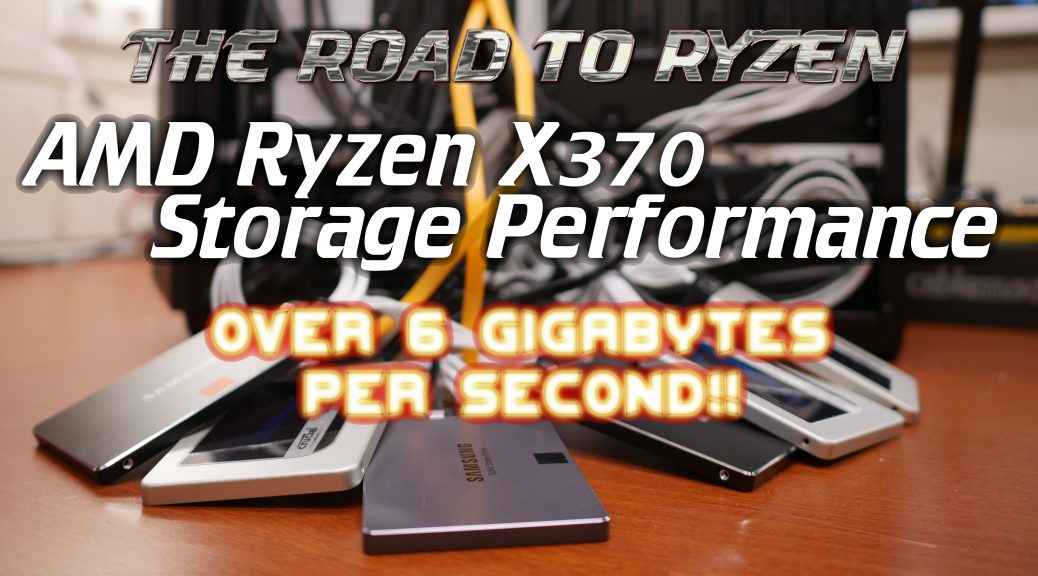 Over the past few weeks I’ve been running a lot of AMD Ryzen benchmarks. This time we’re taking a look at the Ryzen processor in combination with the X370 chipset and see how well it does with storage tasks!

To start off we have the video that probably brought you here. In the video we go through single SSD, multi striped SSD and combined NVMe and striped SSD tests, check it out!

As mentioned in the video the SSDs used for these benchmarks are:

All benchmarks where performed on a Gigabyte Aorus AX37-Gaming-5 motherboard running the 5Fc BIOS. The 1700x was overclocked to 3.80Ghz with 16GB 2933Mhz memory.

Additional to the video below are extra benchmarks. I tested multiple situations which I’ll highlight below.

Be warned, lots of benchmarks incoming!

Here are some benchmarks with all the 6 SSDs in a stripe/RAID0 together. I tried multiple port configurations but it didn’t show any speed differences.

Windows striping has been hit and miss in the past. But in recent versions and since AHCI has been on the latest revisions it’s actually become quite good!

To get some extra data security RAID1 or a mirror is often the best choice on a desktop computer. So I tested it both using the X370 chipest and in Windows using software mirroring.

The chipset mirror/RAID1 didn’t do so well. Reads seem to do fine but writes show bad performance.

Let’s see how well the software mirror does in Windows!

And that’s it. As you can see the chipset does pretty good in RAID0 but when using it for mirroring/RAID1 it falls flat on it’s face.

With the Ryzen CPU supporting ECC memory the AM4 X370 Ryzen platform makes an excellent base for a storage server!