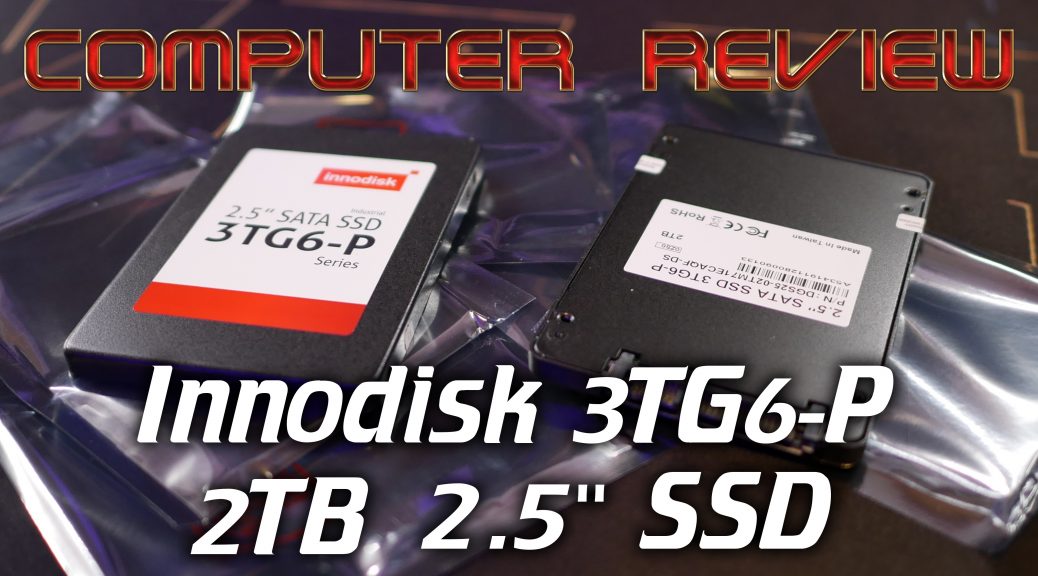 I was in need for some 2.5″ storage for an upcoming project and while looking around I wondered if 2.5″ SSDs has approached the price of physical disks. And while close, even QLC SSDs where still much more expensive. But on ebay I was able to find new 2TB SSDs for around 150$, still more expensive then spinning disk but interesting enough to try it out anyway, let’s see how well they perform!

While searching for SSDs prices haven’t dropped as much as I hoped, a 2TB one, even with the newer and cheaper QLC memory, where mostly around 300$ still. But on Ebay there where a lot of offers for the InnoDisk 3TG6-P 2TB for only about 150$ to 200$ and these SSDs. These SSDs are actually still TLC (Triple Level Cell) SSDs wich is preferable against QLC (Quad Level Cell) since in theory it will last longer and have better performance. But….., something must be up with those, right?

Well, because I was intrigued I bought 4 and have subjected them to some tests!

Here is a quick copy from the Innodisk website. Specification wise it looks like a very decent SSD! Certainly not one comparable with something like a Samsung 860EVO or something like it but especially for the price, very very decent!

Read and write speeds look good, features look excellent, but some information like Write Endurance for the cells and such are missing. There are some more specifications and documents you can find but those all either have TBD or some nonsensical numbers in them.

Supposedly this SSD is also targeted at business use but again I’m not sure if this is for low end OEM integration or high end datacenter use.

For some extra information, here is a crystal disk info: 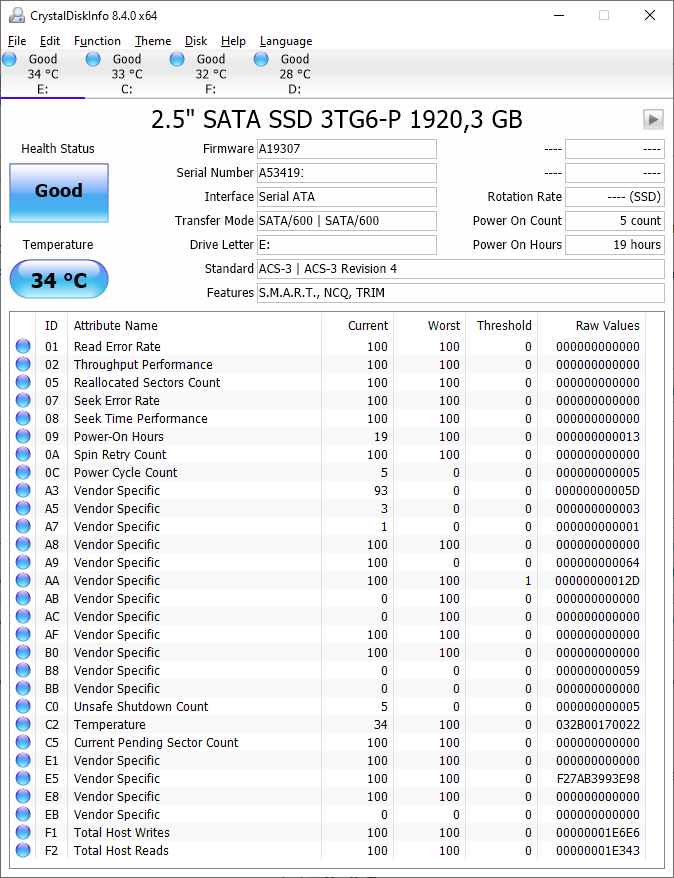 Well, since I have these things, let’s put them to the test! I don’t have any advanced software in place to do long run steady state testing but I do know some generic tools to see how they do at a first glance! I will be testing against a Samsung 840EVO 250GB with the newest firmware. This is an average performer by modern standards though, but still, it’s nice to be able to compare it against something.

I ran ATTO with it’s largest setting (32GB), especially at this setting it means the test takes very long and this test is probably closest to what comes to writing through caches.

What is immediately apparent is that while the old Samsung 840EVO 250GB starts out faster (mostly in regards to reads), it’s not up to the task and after writing through all of it’s buffers it’s write speeds drastically reduce. The Innodisk 3TG6-P doesn’t seem to utilize such a writing strategy and is able to keep writing to the disk and the same speeds even after hammering it for around 10 minutes.

As mentioned, this is no perfect steady state test but it does show potential failing cache mechanisms. This correlates with that as far as I’ve been able to dig up, the Innodisk 3TG6-P doesn’t use an SLC cache but relies solely on some cache DRAM memory. So basically there is no flash cache part to fill up like with the Samsung EVO series which should make response time more consistent.

One of the earliest benchmarks available for SSDs that would write fully random data, making it in-compressible. A few years ago this would trip up certain SSD controllers which relied on compression to be able to achieve their specifications.

Here we see a win for the Innodisk 3TG6-P. The Samsung  840EVO 250GB just isn’t very good at sustained writes. This was a common thing on older and especially smaller SSDs.

Looking at 4K we see that they are quite close but that with a single stream the old Samsung 840EVO 250GB is still the fastest. With multiple parallel threads the newer controller in the Innodisk 3TG6-P is able to handily beat it though. Access-time is mix between the two.

CrystalDiskMark is very compatible to AS-SSD, let’s have a look!

Here the old Samsung 840EVO 250GB holds their own, in some benchmarks it’s close but overal the old SSD seems to beat the newer and much bigger Innodisk 3TG6-P 2TB.

That doesn’t mean the Innodisk is bad though, we’ve already seen that it’s capable of holding this performance level while the 840EVO 250GB cannot, it’s also never far behind

Last in the list of benchmarks is Anvil a benchmark which gives a very good overview of several performance aspects.

And here we see I think the final result and conclusion.

These new Innodisk 3TG6-P SSDs are fair value for the money but mostly because you can buy a 2TB variant below the 200$ mark. Performance wise they trade blows with a 250GB SSD that was released in 2013, in some tests able to beat it but generally having to acknowledge their superior to the much older SSD.

But compared to the current generation of QLC SSDs being released, this SSD with TLC memory can certainly hold their own and write wise most likely beat them all.

But I guess I should just end with this, buy this SSD for the capacity, not performance. If you are debating between buying a 2TB HDD or this SSD, this SSD will certainly be the better choice in regards to performance.

Less demanding tasks such as a Steam/Origin/Uplay/Epic game install drive, it will perform excellent! Running as your main SSD or a heavy database for instance, I’d buy one from a better brand such as one of the new Samsung SSDs for instance.

I can’t say anything about longevity yet but I’ve now tested 4 of these and even submitted them to some pretty heavy tests and they handled it like a champ so in that regard, it’s at least not a dud.

Sure, if you are looking high capacity medium/low performance flash storage device, this SSD is currently a good deal.

Non-affiliate link to buy on ebay