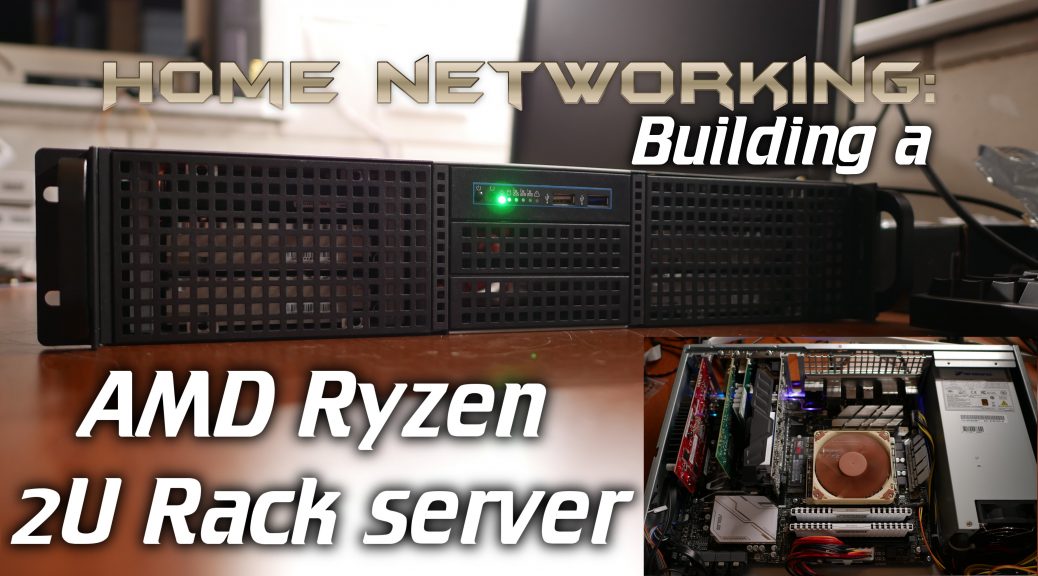 I recently had the need to build a 2U Server for home and LAN party usage. Since AMD Ryzen is now offering a very interesting 8 core CPU with plenty of PCIe lanes I decided to use a Ryzen 1700x. The server is running Proxmox and is even using GPU passthrough! This post will host the first video and some configuration details that are harder to convey in a video. A second video and post with more information about some hardware and the GPU passthrough will go up after this.

(I did another server build but this time in a Fractal Design Core 2300 with a Ryzen 2700, you can check it out here)

2018-05-05 To make sure the system is stable, make sure to upgrade the Asus X370-Pro to the latest BIOS and set the option “Power Supply Option” to “Typical current idle”. This will solve stability issues during periods that the server is idle and sometimes freezes.

For the build I made a Time-Lapse video which includes lots of information overlays. Make sure it watch it first!

For this second video I will go a bit deeper into certain topics concerning the server and the GPU hardware passthrough. One the others subjects is the included FAN PCB and getting the server to make a bit less noise! 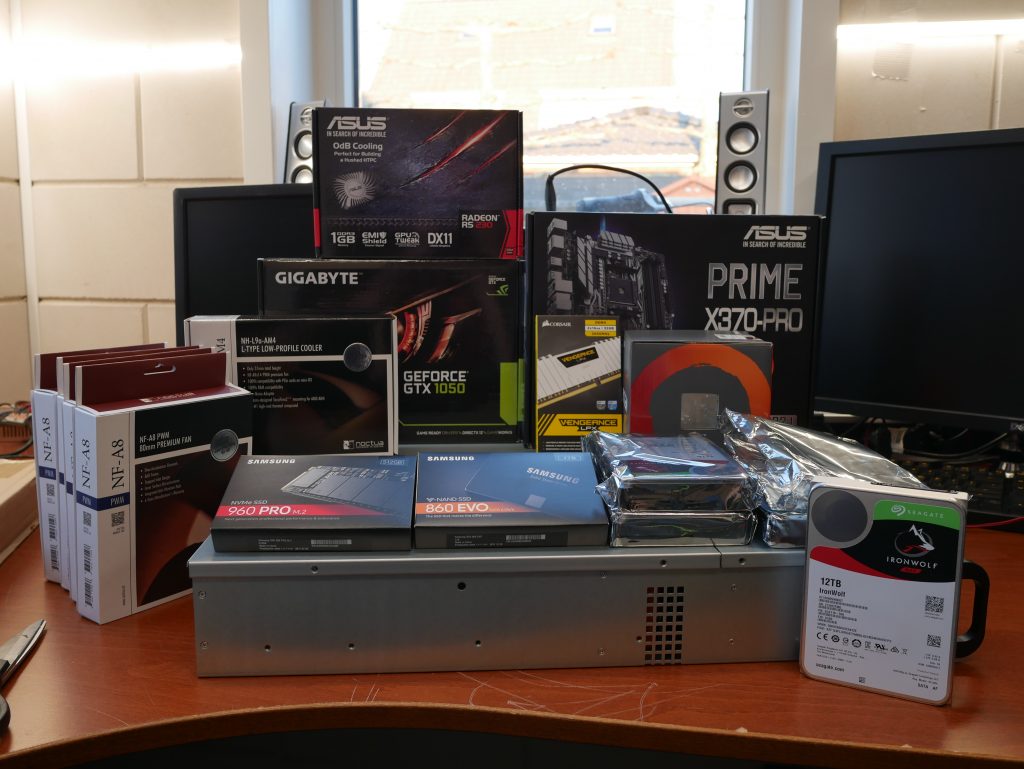 The 2x1Gbit Intel i350AM is a special PCIe x1 variant because all the other slots where full, you can check it out using the link. You can pick up a cheap Intel 10Gbit SFP+ card there too.

You can find the Molex to 5x SATA cable here, or a variant from SATA to 5x SATA here.

If you don’t have enough SATA data cables, pick up some of these nicely nylon sleeved ones.

The system is running on Proxmox VE 5.1. The install you saw during the video was done from a USB stick and everything works out of the box. At the time of writing it was important to enable the testing repository to get a new version kernel for the GPU passthrough.

Proxmox is a virtualization GUI around KVM and LXD/LXC running off a Debian base. It has ZFS natively integrated and offers advanced cluster functionality for running virtual machines and containers. They have a community edition you can run for free! 🙂

Some more information about configuration within Proxmox and GPU passthrough will be detailed in another post.

A lot of people asked me how I configured the ZFS pools so here is a small walkthrough. This is by no means a comprehensive guide to ZFS but mainly what I did to create the storage for this server.

The only expansion option that is left is replacing the 2x2TB drives with another pair of 12TB drives if needed in the future.

The ZFS configuration only consists of mirrors.

During the installer I opted to use the 2x 1TB SSD’s on a mirror. This should provide plenty of performance and security in the case of a hardware failure.

Out of the box, the proxmox installer creates these using drive links such as /dev/sdb, /dev/sdc, etc.. I don’t really like that approach and much rather use /dev/disk/by-id links since when a change occurs in  controllers, drive order or even hosts that won’t ever change.

So the first thing to do is fix this.

I did that using the following commands, I’ll illustrate with screenshots:

And with that you are using (in my opinion) the correct way to connect your disks in ZFS! Now, even when you change drive order, controller or even hosts, it should be able to find all the disks.

For mass data storage I decided to use the 4x12TB in one pool with two mirrors. That makes the most amount of sense with this disk configuration. Why?

The way to configure this is the following:

After creating the pool I advise to enable LZ4 compression. It works wonders on modern hardware, hardly costing any CPU and saving precious space where possible! Even when incompressible files are written it has a mechanism which gives up on compressing those files. It also changes how ZFS access the disk making things a bit more efficient in most cases.

And that’s the pool done!

The 2x2TB disks where added in the same way to a different pool. Although ZFS can handle different disk sizes as mirrors within the same pool I am going to use the disks for different purposes and wanted to seperate the I/O.

Why the need for cache?

I added the Samsung 960 PRO to use as a L2ARC for the server. During LAN parties a video team will be dumping footage and then use those files directly from several PC’s to edit videos. This requires quite a bit of speed to make it work fluently for everyone at the same time.

In part, this is why I added the 10 Gigabit network cards. But with “only” 4x12TB disks which do about 200MB/sec on average that would only give me 400MB/sec on writes and 400 to 600MB/sec on reads maximum. Although those numbers aren’t bad, those are for pure sequential transfers, if multiple people are hitting the pool at the same time, you won’t reach those numbers.

Adding L2ARC can alleviate some of the load on the disks. It will provide another source where it can get the blocks you are requesting.

CONS: Yes, adding L2ARC will cost you some memory from ARC (the in-memory cache) but in my case I believe that trade off to be the correct one

Why the Samsung 960 PRO and using it for multiple pools

I chose the Samsung 960 PRO because of its performance using a single queue depth and because it uses MLC memory instead of TLC so can handle writes and endurance a bit better.

Because this SSD is connected using PCIe 3.0 x4 it has about 4000MB/sec of bandwith and the specs of this SSD say it can deliver about 3500MB/sec read and 2100MB/sec write. Now it won’t do that during L2ARC/SLOG duty but I’m hoping it will come closer to saturating the 10Gbit or providing more I/O in conjunction with the disks then just the disks alone.

If you are a ZFS purist, this device cannot be used as an ZIL/SLOG device. In my opinion, unless you go the whole route with ECC memory, a UPS and/or disable disk write caches, etc. not having power loss protection on your SSD will be the last of your problems. But, decide for yourself how important the last few seconds of data are for you!

Nevertheless, I have appointed some space on the SSD so I can play around with an ZIL/SLOG. Therefor I’m using the following partitions on it.

Creating the partitions for L2ARC/ZIL

To create the partitions I use a tool called “gdisk”, using the following line:

To create the first partition hit

Continue those commands to create all the partitions. After that you should see something like the following: 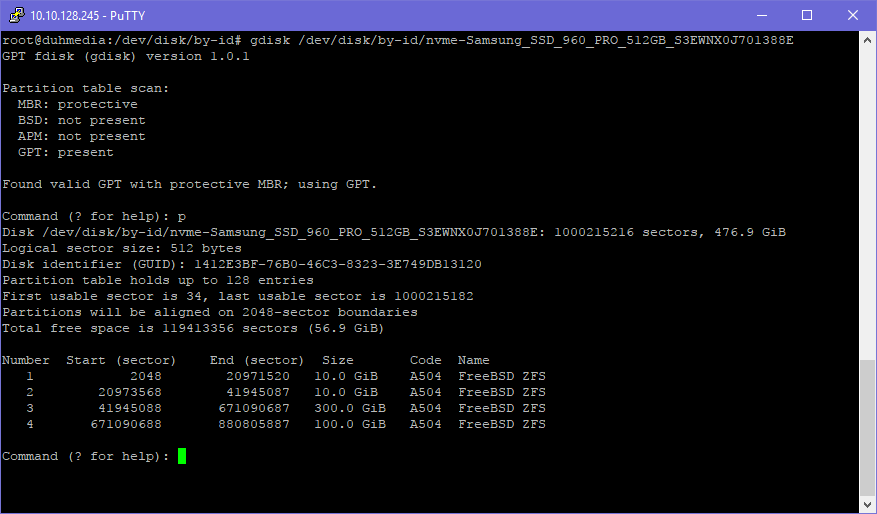 Adding a Cache to a pool

To add a cache to a pool you run the following command:

Adding a ZIL/SLOG to a pool

To add a ZIL/SLOG (see warnings above!) to a pool, run the following command:

Because I want the cache to have parts of most of the current media files on it, I raised the L2ARC fill rate setting. Normally this setting is set conservatively to only cache much used blocks over a long period of time and not sequential files so the SSD won’t be trashed too much with writes.

If you should change this setting and if it will be beneficial for you really depends on your usage, so use it with caution! It will cause a lot more writes on your SSD and might not give you better performance!

To change these values you need to create a new file in /etc/modprobe.d. You can use the following commands:

After this you need to perform a:

to make sure the values get loaded during booting. When that’s done, reboot the system. You can check the new values in the files located in: /sys/module/zfs/parameters

This sets the L2ARC to a max write speed of 500MB/sec and to cache everything from single blocks to sequential reads.

Again, I can’t warn enough about this, these settings might be completely wrong for your installation and use case and might actually make performance worse and kill your SSD sooner, use with caution, do your own research!

End of this part

As written above, I’m going to make a second blog post talking a bit more about Proxmox and using GPU passthrough together with a video showing some hardware features and how to make this server quieter then it comes out of the box.

If you have any questions or comments, let me know down below!