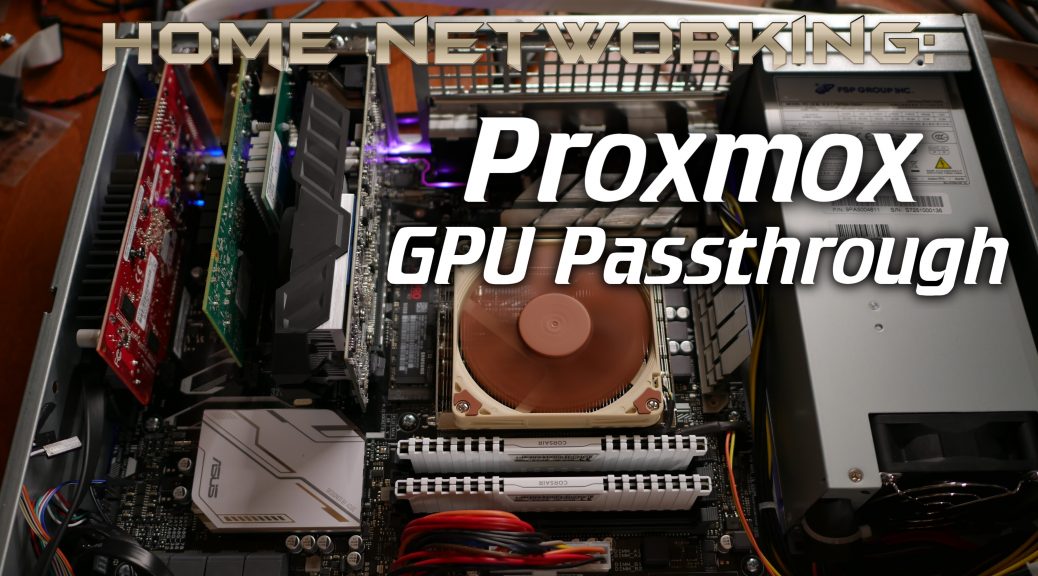 As I mentioned previously, one of the reasons for this server is to use it as a live streaming server for some of the IP cameras we use on our LAN parties. Since we now have 8MP/4K IP cameras I also wanted to stream in 4K, preferably in 60FPS to make scrolling text look all beautiful and crisp.

I use either OBS or Xsplit to do my streaming but OBS is mostly the most efficient with given resources. I’ve tested with this in a Windows virtual machine before but without GPU assistance for compositing and stream decoding/encoding the amount of CPU power that this needs is insane (~80% of the Ryzen 1700x with 8 cores) to run 4K/30.

With the GTX1050 doing the compositing in passthrough and using NVENC to do the encoding CPU usage drops to about 10% of 4 cores assigned and the GPU is utilized around 60% while sending 4K/60, a very big improvement and freeing up the CPU for other tasks. 🙂

But how to configure this, sadly it’s not (yet) possible to just configure it from the GUI.

This information below is gathered from a lot of helpful forum threads on the proxmox forum and all over the internet! Sadly there didn’t seem to be one place that lists everything so I’m going to give it a try.

The following posts helped me:

At the time of writing it’s smart to enable the test repository within proxmox. Especially for AMD Ryzen, the newer kernel has certain patches which make virtualization and passthrough work a lot smoother and efficient then it did before!

The kernel I’m running at the time of writing is:

Inside of /etc/default/grub change the following line to include:

This changed the grub boot parameters to enable IOMMU for AMD in PT mode. It also parses a video command essential to making the first slot available for GPU passthrough.

After changing the line run a:

to make sure the changes are taken into account after you reboot. After the command completes, do a reboot.

When rebooted (Make sure IOMMU is enabled in your BIOS) check to see if IOMMU is now active:

I specifically spec’ced the server to include a AMD Radeon video card and an NVidia video card. Since we want to use the AMD Radeon card as our console card, we need to let proxmox load any necessary drivers for it. But the NVidia card we want to passthrough so it shouldn’t load any drivers or initialize that card.

To accomplish this enter the following:

When that is done enter the following commands to make sure these drivers are loaded during kernel initialization:

When that is done run a:

Once that is done, we’re going to find the PCI ID’s of the NVidia GPU we want to passthrough. Run a:

which will output a whole lot of information about all the PCI cards in your system. Find the NVidia card:

and note it’s PCI ID, in my case it’s 08:00 that we need. Remember, if you ever change anything in your device configuration (enable/disable sound card, USB, add a NIC, etc.) the order of the PCI devices can change and the following will need to be changed accordingly.

to find the vendor IDs, we are going to need them to assign a different driver to it, in my case the output was:

Now that we know that, do the following:

Once that is done, reboot your system.

Once the reboot is complete, use lspci -v to check that the NVidia card is now using the vfio-pci instead of any NVidia driver as can be seen in my example above.

Create a new virtual machine inside of Proxmox. During the wizard make sure to select these things:

After the wizard completes, we need to change a few things:

The next step I only know how to do using CLI, for this open an SSH session to the Proxmox host and run the following:

Here you will find the config files for your VMs. We need to add a line to the VM you just build. In the console you can see the ID such as 100 or 103, etc.. Once you know the right ID, run the following:

Now return to the web GUI and install Windows as normal. Because of the Hard Disk controller selected it won’t find a drive to install to during the install wizard but just select the ISO we linked to the second DVD-ROM drive and select the “vioscsi” directory.

Make sure you can remote control

Once installing and updating Windows there is one thing you need to make sure of, that you can remotely login to the VM. The reason why is because if you boot the VM with GPU Passhtrough, it disables to standard VGA adapter after which the built-in VNC/Spice from Proxmox will no longer work.

This means you need to enable RDP and set a static IP or install any other form of remote control (VNC, Teamviewer, etc.).

Once that is done, shutdown the VM, we need to make another config change!

Passing through the GPU

Now that we have everything prepared, we need to add the passthrough information:

Save the file and see if the VM starts. If it does, great, you are probably done! Windows should see the GPU and start installing a driver from Windows Update. Let it do that for a few minutes and if you want you can then replace the driver with a freshly downloaded one.

It’s not working, now what?

Well, this is a bit complex but if GPU passthrough will work depends on your PCIe layout and a few other things.

One of the things that is important is your GPU BIOS. Some motherboards are more difficult to deal with then others but if you are trying to passthrough the same GPU that also displayed your BIOS information, you might find that it’s not working in that slot but does work in another slot or as a “second” video card.

If that’s the case, you need to get a copy of your GPU video BIOS and add it into the config file.

As mentioned above, sometimes you need to give KVM your video ROM to be able to boot the VM with GPU passthrough on correctly. It has something to do with having the re-initialize the video card to “disconnect” it from your motherboards BIOS control.

Although there are guides how to extract your video BIOS under Linux, all of these did not work for me.

I looked around on TechPowerUp for a BIOS trying to match my card (GTX1050) and download one, but I couldn’t find the correct one.

So I proceeded to install the GPU as a second video card (primary will work too) in another PC and booted Windows. There I used GPU-Z to extract the BIOS to a file.

Get the ROM file downloaded to your Proxmox host and put it in “/usr/share/kvm/”.

Once that is done, we need to add the ROM to the line we added to the config earlier. So open /etc/pve/qemu-server/100.conf again and change the line to something like this:

Save it and try to start the VM. Hopefully now it works!

For me, it still didn’t though. Turns out there is another little trick to this!

NVidia has some sort of lock in some Video ROMs to disable the usage inside of a virtual machine, they want you to buy their more expensive cards which do enable this functionality.

But we’re not trying to abuse the GPU for anything like it would be used for in the Enterprise, we just want to pass it through to a VM.

Recently, someone made a little Python tool to strip off the first part of the Video ROM to make it work again!

The Python script is called NVIDIA-vBIOS-VFIO-Patcher and be found at the link.

Run the script on your Video ROM and upload the stripped/patched version to your Proxmox host (or run the script on there after installing Python). Put the file in the “/usr/share/kvm/” directory again and edit /etc/pve/qemu-server/100.conf to now include the following:

Once that is done, try starting your VM again. For me, that fixed the issue and all was working!

If you are still having problems, there could be noumerous things that are the problem. This is also by no means a complete guide. For instance I did not talk about any BIOS switches you need to set because I believe those to be obvious (such as IOMMU, etc.)

The best place to start resolving any issues you are still having is googling around for more KVM and GPU passthrough guides. As mentioned earlier there are a lot of excellent posts on the Proxmox forum. But also posts from for instance “UnRAID” from limetech or other operating systems such as Fedora can apply. It’s all using Qemu/KVM and as such you might find a hint where to look or what to change to make it work!

Currently I have one remaining problem, once I boot the Proxmox host and start the VM, all is well, GPU usage is as expect and only lose around 1%-3% from bare metal. But once I shutdown the VM and start it again, suddenly the GPU usage while doing the same tasks (for me it’s video encoding and compositing using OBS) is more then double (~35% to 85%)! I’m not yet sure what is causing this but a workaround is rebooting the host.

As always, questions and comments are always welcome! Let me know if you got it to work!